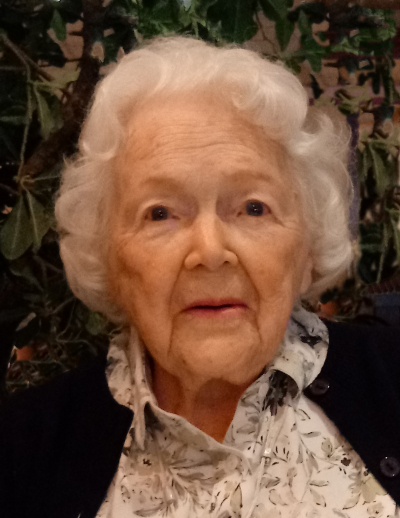 Virginia D. Luna died at the age of 108 at her home of the last 60 years in Atherton. She was the widow of the late Henry P. Luna, retired Captain, American Airlines, and Colonel, US Air Force Reserve, who died in 1988, and mother of Jane Luna Euler, who died in 2019, and Douglas P. Luna, who survives.

She was born in Chicago, Illinois, in 1913 to Frank H. Dietcher and Eva Hill Dietcher and moved with the family to Pasadena, California, in 1923. In 1931 she went to New York, where she met her future husband taking lessons in riding he taught while completing studies at NYU’s Guggenheim School of Aeronautics. They married in 1936 following his flight training and commissioning in the Army Air Corps and release from active duty and employment with American. Their son came in 1939 and daughter in 1941. The family bought their first home in the Long Island, New York town of Port Washington, in 1941 and remained there during Mr Luna’s service with the Army Air Corps in the Pacific and until 1949, when he transferred to American's base in San Francisco. The family first located in Los Altos; a year later moved to Menlo Park; and finally Atherton in 1961.

Mrs. Luna was a member of the Daughters of the American Revolution and San Mateo County Republican Women, and former member of Sharon Heights Golf and Country Club, of which her late husband was president in 1968. Interment will be at Arlington National Cemetery with Col. Luna.

Photo Gallery
0 photos Upload a photo
Remembrances
0 entries Submit a remembrance
Memorial service
A memorial services will be held graveside at Arlington on a date yet to be scheduled.
Make a donation
Donations in lieu of flowers may be made in Mrs. Luna’s behalf to the Scleroderma Foundation or the Pulmonary Fibrosis Foundation in memory of her daughter, Jane.
About this site     Contact us