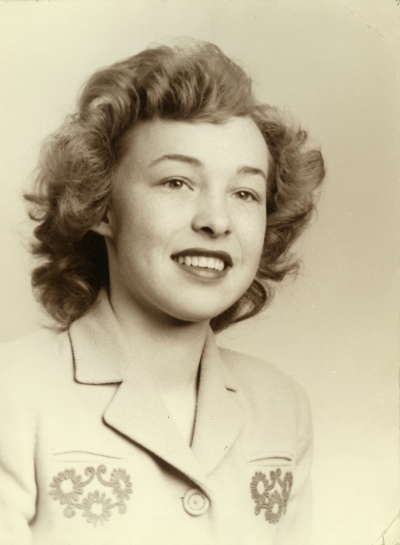 Virginia Lucile Fitton died peacefully on April 11, 2021, surrounded by her family. She had recently celebrated her 95th Birthday at a small, joyful event with family and friends. Her life was dedicated to learning how to love in every situation and unending gratitude for her meaningful journey.

Virginia (Ginny) was born on April 6th, 1926 at San Francisco Children’s Hospital, the same hospital where her mother was born. Daughter of Amy and Richard Luke, she was raised in San Mateo (attending San Mateo High School) and was a lifelong resident of the San Francisco Bay Area.

Ginny attended San Jose State University, graduating with a B.A. in Art. Song and dance performances were primary to Virginia’s campus life, as she performed with the “Dull Skulls” at numerous athletic and college events. It was there that she met Donald Fitton, describing feeling an “electric jolt” when she first saw him at a social gathering. They were married on October 7, 1949 and celebrated their 70th wedding anniversary in 2019.

During the 1950s, Virginia worked for Varian Associated in both San Carlos and Palo Alto as Purchasing Agent and Assistant Editor of Special Reports. Virginia and Don lived as newlyweds in San Francisco, then Belmont. During this time, they adopted two children--John in 1955 and Kris in 1958. They then moved to Menlo Park where they raised their family and lived for 17 years.

In 1974 the Fittons moved to Portola Valley; and in 1977, moved again to Palo Alto where they remained for the next 44 years, enjoying a loving community.

In 1954, Virginia and Don attended a seminar on the Teachings of Jesus led by Stanford Professor, Dr. Harry Rathbun, and his wife, Emilia. This seminar changed their lives. Over the next 40 years, Virginia and Don would lead similar seminars on the Teachings of Jesus and the human maturation process throughout the United States, as well as Canada, Sweden, Germany, Australia, Venezuela and India.

In the early 1960s Virginia and Don were leaders with the Creative Initiative Foundation (CIF), located in Palo Alto. Working with the Rathbuns and others in the community, they formed the AMR Institute, focusing on the human condition as influenced by attitude, motivation and response.

During the Vietnam War years, Virginia and Don directed the formation of an urban, interracial youth service corps. Together, they taught a Stanford Senior Colloquium and led student seminars for the Peace Corps and Vista on the establishment of an ethical base for human life.

In 1982, based on the growing threat of nuclear war, CIF shifted focus to increasing awareness and education to prevent nuclear war. Virginia and Don were co-founders of Beyond War–a movement which began locally and grew to 50,000 worldwide. Virginia was Executive Director of Personnel for Beyond War until its transition to the Foundation for Global Community where she served as Trustee into the early 2000’s.

Virginia was a spiritual teacher for many, sharing her practical wisdom, deep insights, and compassion with all who knew her. She also continued to sing and dance, learning to tap dance in her 80’s and perpetually winning family Christmas talent shows, teaming with Don to sing duets and play the ukulele in her 90s. Virginia continues to inspire us to live each and every day in gratitude.

Virginia is predeceased by her husband Donald and her daughter Kris. She is survived by her son John Fitton, his wife Mary Lynn Fitton and her grandchildren Tyler Sexton, Jack Fitton and Ellie Fitton.

Photo Gallery
0 photos Upload a photo
Remembrances
1 entry Submit a remembrance
From Debbie Mytels
April 22, 2021
Virginia was an amazing community leader, and she contributed so much to humanity's understanding of our place on the planet. While I didn't know her earlier work in Creative Initiative (except by reputation), I first encountered her in Beyond War, ...
Read more
Make a donation
In lieu of flowers, donations can be made toward a “Virginia and Don Fitton” memorial bench to be placed in Heritage Park, downtown Palo Alto. friendsofpaparks.org or send check to Friends of The Palo Alto Parks 425 Grant Ave. Suite 27 Palo Alto CA 94306
About this site     Contact us