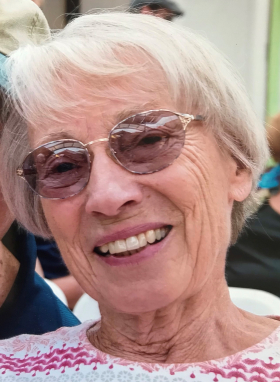 Corinne Monahan died on October 25, 2022, after a brief illness. She is survived by her loving husband of 37 years, Jack Monahan; three children, Stephen Myers (Valerie), Susan Myers Keshner (Glenn), and Nancy Myers; four stepchildren, Jay (Laurie Chambers), Patrick, Chris (Ann), and Heather Fortes (John); seven grandchildren; and three (soon to be four) great-grandchildren. She was preceded in death by her son, David Myers; her brother, Richard; and her parents. Corinne lived in Palo Alto for many decades before moving to Santa Rosa with her husband in 2000. Her four children were educated in Palo Alto schools and graduated from Palo Alto High. In addition, Corinne taught microwave cooking at Friedman’s Microwave Ovens in Town and Country Village. Born in western rural Connecticut, Corinne spent her early years attending school in a one-room schoolhouse and exploring the countryside with her older brother. The family’s move to the “big city” of Torrington, CT, when she was in 8th grade marked a transition where, for the next several decades, the family spent every summer managing their cottage-rental business in Cape Cod, Massachusetts. Corinne attended Simmons College in Boston, MA, getting a degree in Home Economics. She always said that her college years were some of her happiest and most memorable. Her band of three best girlfriends stayed close for the rest of their lives. Residents of Oakmont (Santa Rosa) for 22 years, Corinne and her husband, Jack, stayed active and involved. Corinne swam one mile every day, and became close with many friends at the pool. She was also a docent at Bouverie Preserve in Glen Ellen and a season ticket-holder to the Santa Rosa Symphony. As a wife, mother, grandmother, and great-grandmother, Corinne will be remembered as a loyal, supportive, vibrant, and engaged woman who treasured time with loved ones and hearing about all the comings-and-goings of her family and friends.