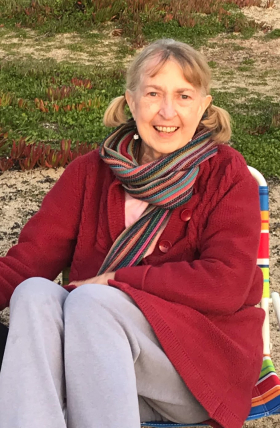 Dona May Smith-Powers was born June 5, 1939, in San Francisco, the first child of Donald and Mayble Smith. She spent her first 8 years living in Sunnyvale before the family moved to Berkeley, where she and her three siblings lived and grew among the steep hills and foggy vistas. Dona especially enjoyed being active in the youth group in her church, and would spend many summers working at Mount Hermon Conference Center in the Santa Cruz mountains. After graduating from high school, Dona attended Ottawa University in Kansas. There, she met Stephen Reddy, and after graduating, they were married and had two children, Darin and Melanie.

After moving to Palo Alto in 1973, Dona eventually began working at local churches and doing some jobs for social service organizations. She found much value in working for and helping those who were struggling with their spirituality, and after spending time counseling disadvantaged youths in San Francisco, she chose to pursue a Master of Divinity and graduated from American Baptist Seminary of the West in 1995.

Dona enjoyed being outdoors and especially liked traveling by car. She would take road trips with her family throughout the western US, sometimes tent camping along the way. She would visit places as far as Asia, Europe, and the Middle East. Dona enjoyed listening to music and making music, she was accomplished in piano and used her skills to give lessons to her grandchildren, and was often asked to play during services at a local church.

Throughout her life she especially enjoyed being sociable with many close friends. She liked to use her time doing volunteer work, including delivering food to local families, and traveling with members of Rotary International to Northern California building playgrounds for The Yurok Tribe.

During her later years, she would use her passionate and persistent personality to tackle head-on the medical issues she faced. Her caregivers were impressed with the vigorous attitude she possessed!

Dona is survived by her children Darin and Melanie, and grandchildren Matthew, Julia, Brian, Clara, and Daniel.

Dona made a strong impression on everyone she encountered, and has been and will continue to be an inspiration to all…