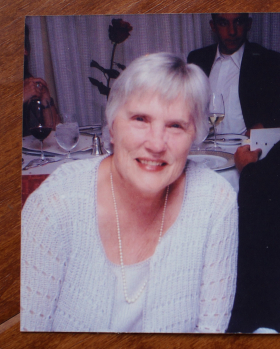 Friends and loved ones take comfort knowing she is over the rainbow. They remember a vivid, attractive woman who loved her family and Palo Alto, where she lived from 1965-1980 and 1995-2018.

Her volunteer life included serving on the library and other committees at First United Methodist Church of Palo Alto. She was an active member of the PEO Sisterhood in Palo Alto. She contributed to Roots & Shoots and played bridge.

Ovenshine was an ambassador for Palo Alto, displaying a "Doors of Palo Alto" photograph in her Webster Street home. She attended Stanford football games, retailed at Stanford Shopping Center and knew the architecture of "Old Palo Alto." She was a member of the University Club and kept up with Palo Alto School District issues.

Ovenshine was born April 3, 1936, and grew up in Garden City, New York. She attended Ohio Wesleyan University. She married Thomas Ovenshine of Rockville Centre, New York on June 3, 1959. The marriage produced three children, twins Gordon and John and Sally. They grew up in Palo Alto and Reston, Virginia.

To her family and friends, Elinor was a joy, consistent in personality and keeper of memories. She decorated her walk-in closet with more than 100 family pictures, 80 years of legacy displayed like an art exhibit.

In the 1970s, she accompanied her geologist husband Tom to the backcountry of Alaska, where he researched glaciers and earthquakes. Later, she traveled with Tom to China.

In the 1980s and 1990s, Elinor worked as a teacher's aide in Northern Virginia and rejoiced at the arrival of what became eight grandchildren and three great grandchildren. She assigned totem identities to each, such as oldest, first girl and first of Sally's children.

Ovenshine loved her second home, Andesite House, in the Sierra town of Graeagle, along the middle fork of the Feather River at 4,300 feet elevation.

Ovenshine's ability to maintain a positive disposition in life was nothing short of remarkable. She was a glass-half-full. She will be missed.

Elinor was preceded in death by her parents, Gordon and Katherine "Kay" Hyle; Husband Tom; and son John. Survivors include Gordon Ovenshine and wife Kristianne of Mars, Pennsylvania; Sally Dockter and husband Scott, of Charlottesville, Virginia and grandchildren and great grandchildren living in New York, Virginia, Oregon, and Washington.

Memorial contributions may be made to the Alzheimer's Drug Discovery Foundation: https://www.alzdiscovery.org