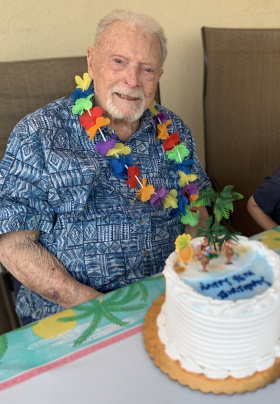 Jack P. Barrie, 96, who passed away on August 31st, was born to Thomas and Myrtle Barrie in Los Angeles, California on July 9, 1925. He graduated from San Bernardino High School in 1943 and joined the Navy on his 18th birthday as an Aviation Metalsmith. He was stationed at Moffett Field Naval Air Station as a mechanic on the Hedron 3 – Lighter Than Air, the airship (blimp) for anti-submarine patrolling along the west coast. In 1944, Jack met Nink, the love of his life, at the USO. They were married almost 65 years before Nink passed away in 2010. They raised their children, Jon and Janet, in Palo Alto.

Jack was a proud alumnus of Stanford University and went on to have a successful 35-year career at NASA, Ames Research Center as a Civil Engineer and Branch Facilities Manager. He was a member of the BPOE Palo Alto/Sunnyvale Elks for 59 years.

Jack was a talented draftsman, civil engineer, craftsman, sportsman and family man. Jack designed over 20 buildings and the entrance to 30 offices in the 40 x 80 wind tunnel at NASA Ames. He built and remodeled his house and cabin. He could fix anything.

Jack also loved sports! Jack was a huge fan of the 49ers, Giants, and Warriors, and especially enjoyed coaching and umpiring baseball. He played fast pitch softball and made lifelong friendships with his softball teammates who nicknamed him “Jackrabbit.” He enjoyed fishing and skiing and going up to the cabin at Mi Wuk Village in the Sierras. Jack and Nink enjoyed traveling the world and meeting relatives in England and Scotland.

Jack’s and Nink’s greatest joy was being surrounded by their family. They attended every sporting event, music concert, and school activity they could for their children and grandchildren, but their best memories were made spending time with the entire family at the cabin.

Jack loved life and lived life to the fullest every day. He was still as sharp as a tack and funnier than ever at 96! Everyone who met him felt an instant connection that left a lifelong impression.

Our families were truly blessed to have been able to spend so much time with him. He taught us life lessons that we will always treasure. We will cherish all the incredible memories of a one-of-a-kind man who had such a kind and gentle soul.