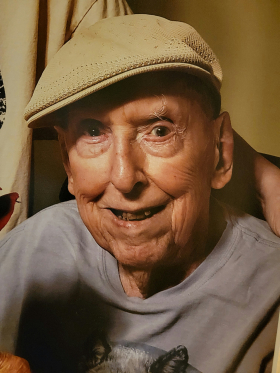 James Joseph Mulvey (“Jim”) died peacefully at home in Palo Alto on December 7, 2021. The cause of death was Thymus cancer. He was born in Baltimore, Maryland, on January 23, 1923, to Joe and Gertrude Mulvey. Jim graduated from Calvert Hall high school in 1940 and joined the United States Merchant Marines in 1940 when attacks on Allied commerce began in what would become World War Two. After the attack on Pearl Harbor, Jim enlisted in the United States Army and served in the South Pacific until 1946 --receiving a Purple Heart after being wounded in combat in 1944 during the Battle of Biak Island. He achieved the rank of Combat Sargeant Major at the age of 19 (at the time, the youngest soldier in Army history to reach that rank). In 1945, Jim was an early participant in the liberation of the infamous San Tomas prison camp on Luzon Island during the battle of Manila.

Upon leaving the Army, Jim returned to Merchant Marine service as a licensed master mariner until 1960 and joined the Society of Naval Architects and Marine Engineers. In 1943 he married Barbara Bell, and their daughters, Julie and Peggy, were born in New York. During the same period, Jim attended Hofstra University, receiving a Bachelor of Arts degree in Political Science in 1953, and was elected to five national scholastic honor societies. While at Hofstra, Jim also completed the course work for a Master’s degree in History before moving to San Diego with his family in 1954. He and Barbara divorced in 1964.

Jim moved to Pasadena, met and married Patricia Maxwell (“Trish”), and worked as an independent contractor using his technical writing and editing skills. After Trish’s telephone company work relocated the couple to the San Francisco Bay Area in 1971, they moved to Palo Alto, and Jim attended the University of California’s Hastings College of Law. He also pursued an interest in writing books for children, and self-published three with his daughter, Julie, providing illustrations and calligraphy: “The Leprechaun’s Wondrous Dream,” “The Butterfly Who Wouldn’t Fly,” and “The Little Bird Who Wouldn’t Sing.”

Jim was preceded in death by his sister, Mary Ann, and his daughter, Peggy. He is survived by his wife, Trish, of 55 years; his daughter, Julie Lucas and her sons Jon and Aaron Lucas; his sister-in-law Kit Maxwell; and Trish’s niece Samantha Elliott and her family. In keeping with his wishes, there will be no memorial service, and Jim’s ashes will be scattered at sea.