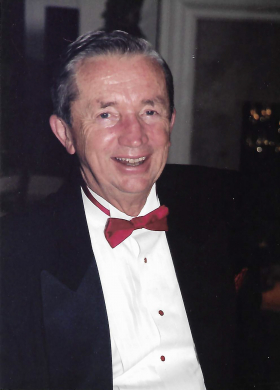 After a long illness, James Paul Woollomes left this world on “All Saints’ Day,” November 1, 2021. Although named James Paul when born in 1931, he was always addressed by his middle name. Paul was one of this earth’s truly good men.

Paul was born and grew up in San Francisco, CA. His parents were Helen Gaughan Woollomes and James Paul Woollomes Sr. He attended Commodore Sloat Elementary School, Lowell High School and he graduated from the Business School at UC Berkeley. He was a Captain in the Air Force and was active for a short time but served for twenty years in the Air Force Reserve. He worked in the investment business and was a talented stockbroker for fifty years. He began his career at his father’s firm Wulff Hansen and ended his career at Smith Barney in San Francisco, then part of Citigroup.

In July of 1960, he married Martha Taylor Madden of Indianapolis, Indiana. They began their married life on the San Francisco Peninsula and raised three daughters there. Paul’s family meant a great deal to him. When the girls were growing up and his family was vacationing at Lake Tahoe, he commuted every weekend during the summer to be with them. All looked forward to his delectable grilled mountain chicken and hamburgers. There were trips to Tahoe during the winter and summer. Many years the station wagon was filled with adult Corgis and puppies along with the family. As the girls grew, he was an involved father helping with their sports, their special projects and as a math tutor.

During his retirement years, Paul loved to work with Ham Radio. He bought a 1968 Volkswagen and completely rebuilt it inside and out. He installed all the floors in his house and painted and papered the walls as well. He was diligent about pruning “his” rose bushes in the garden. Film photography was also of great interest to him. Additionally, he and Martha enjoyed traveling together. They took several driving trips through Europe and had a grand time fly fishing on the Snake River in Idaho. Paul had fond memories of fly fishing with his father when he was a teenager.

Paul is survived by his wife Martha, his three daughters: Susan Coggins, Mary Lipian, Sarah Grebe, his sister Loraine Fulmer. and his niece Julie Mason. Paul had a wonderful sense of humor and was a true optimist. He was warmhearted, considerate, generous, and a man of integrity. During his illness, he made caring for him as easy as he could. He will be sorely missed. The family thanks caregivers John Patacsil and Wendy Mamiam whose excellent care for Paul is greatly appreciated.

A suggested donations in Paul’s memory can be made to the Menlo Park Rotary Club: P.O. BOX 876, Menlo Park, CA 94026. Or please donate to a charity of your choice.