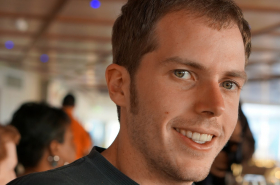 Joshua Lange (35) passed away unexpectedly on January 3rd, 2022. Although his life was too short, it was one filled with excitement, courage, adventure and--most of all--love. Josh started his adventures early by living in Japan and working as a fashion model at the age of 2. The family travels eventually took him from Japan through England to Menlo Park, California where he grew into a handsome young man, eventually graduating from Menlo Atherton High School and then Cal Poly San Luis Obispo with a degree in computer science. From there he quickly excelled, his brilliance in the field attracting multiple employers, including Microsoft where he worked at the time of his passing.

As smart as he was industrious, he still found time to take many adventures. He lived all across the US with homes at one time or another in San Francisco, Seattle, Little Rock, New York City and New Orleans. Everywhere he went, he was soon surrounded by many hilarious and fun friends from across the tech industry.  After he lit up a room with his good looks, bright smile and infectious giggle, he would then enthrall everyone with his vast knowledge of almost any subject.

Josh was so very loved by those who survive him: father Harry Lange and stepmother Hiroko Sahara, mother Jayne Lange, stepfather John Roberts, his loving sisters Julia Lange and Sarah Lange, brother-in-law Edward Barta and niece Mabel Barta.  Of course, he is also adored by his extended family and many friends around the world.

A memorial service was held in San Francisco on Friday, January 21. In lieu of flowers, the family has asked for contributions to be made to The Joshua Lange Memorial Fund at The Trevor Project.