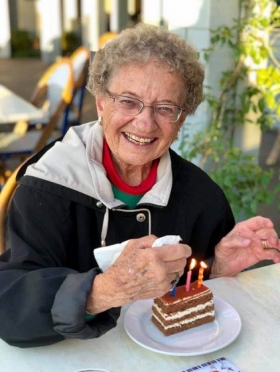 Julie was born in Torrance, California, and raised in Alhambra, California. She attended Garfield Elementary and Alhambra High School before earning a Bachelor's Degree in English and her teaching credential from the University of California, Santa Barbara.

Her family had a cabin at Lake Arrowhead, where she enjoyed a lifetime of summers water-skiing, boating and swimming. It was there that she met her husband Paul Clark Freeman, during the summer of 1960. Paul had a summer job working for a lumber company, and Julie worked in the village snack bar. They were married June 23, 1962.

Julie began her teaching career in Burbank, CA, where they welcomed Susie and Wendy. She and Paul bought their first home in La Canada, CA, then moved their young family briefly to Sacramento, CA. They settled in Palo Alto, CA in 1968, where Jay, Andy and Bryce were born and they raised their family.

When her children were young, she was an active volunteer at Green Gables Elementary School; serving as homeroom mom, on the PTA, and helping with Field Days. She taught a creative writing class at Green Gables which was loved and appreciated by many students over the years. She introduced “New Games”, a collection of fun, unconventional activities that involved teamwork and creativity. Having achieved the Curved Bar as a Girl Scout, she supported Susie and Wendy's troops.

As her own children grew, Julie returned to teaching as a teacher’s aide at Palo Alto High School. She later worked as a private tutor until her recent retirement.

Her passions and hobbies included reading, writing letters, postcards and thank you notes to EVERYONE, playing the piano and ukulele, singing with the Sunday Singers, baking, book group, tennis and movies. She traveled to much of the U.S., visited Switzerland, Hong Kong and Ireland, and enjoyed river cruises on the Columbia and Rhine rivers.

Julie was a devoted Christian Scientist and a 50-year member of the Palo Alto church. She wore many hats multiple times; serving as reading room librarian, on the board, as head usher, on the care and music committees, in the children's room, and playing piano for the Sunday school. She was ever present.

Julie will be missed by many, and lovingly remembered by all.