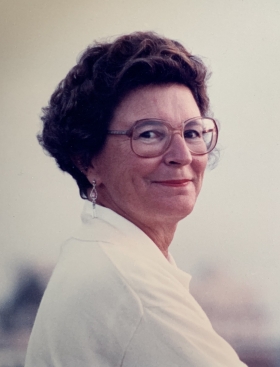 Linda Price Williams joined her angels on April 27, 2020, surrounded with the love of her family, at home in Sun City Lincoln Hills, CA. She was unexpectedly taken by a stroke. Her sunny personality will be missed by many. Linda grew up climbing trees and exploring grassy fields in Menlo Park, CA when it was still “in the country.” Her life was about doing everything to the fullest. She was a force to keep up with - full of passion, energy and love. The daughter of Stanford graduates and long-time Ladera residents, she attended Las Lomitas School in Atherton, CA and then Menlo-Atherton High School, graduating in 1956. She went on to study at San Francisco State University and San Jose State University, graduating with honors, attaining a degree of her own design from San Jose State in 1974. She married John J. Williams of Palo Alto, (Palo Alto Swim Club founder) in 1959 and raised three children. She pursued and achieved success in many careers during her lifetime. During her early days, she was a lifeguard and swim instructor and worked at Rinconada Pool and Parker Academy. She also worked for the Palo Alto Parks and Recreation Department and Preuss Pharmacy in Menlo Park during high school. Later, while juggling the responsibilities of a wife and mother, she taught adult education classes in the Los Altos/Palo Alto area, and then she moved on to business marketing and management ultimately becoming a business owner. After retiring in 1992, she filled her days to the brim by traveling the world with her husband John and staying active by moving to the Villages in San Jose and then later moving to Sun City Lincoln Hills Community helping to organize the tennis courts and founding Bosom Buddies, a breast cancer survivor support group. She had many hobbies including tennis, golfing, swimming, reading, gardening, cooking, becoming a writer and spending time with her family and grandkids and her close friends. One of her proudest accomplishments came following a visit with her cousins Bronson and Flora in San Diego. She discovered the second half of a treasure trove of love letters that her grandparents had written to each other at the turn of the 20th century. Half of these letters had been passed down to her cousin, while the other half of the letters had been passed down to her and they had all been saved for years. Thus, Linda dove into her next big adventure of becoming a published author. She self-published California Love Letters–1903-1918: Twelve Cents for Special Delivery, a book documenting her grandparents' fabulous lives. After that she stayed active writing her memoirs and participating in the SCLH Book Club and the Flower Farm Writers Group. Linda is survived by her husband John J. Williams; sister Patsy Schmutz; children Laurie Young and husband Robert, Steve Williams and wife Kirsten, and Pam Albright and husband Dave; and her six grandchildren Alyssa Young, Michael Young, McKenna Williams, Cullen Williams, Sarah Albright, and Josh Albright.