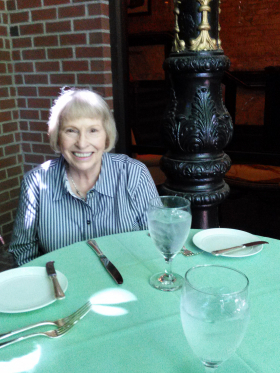 Patricia Badali Ichelson was known for her extraordinary dedication to family and helping to create a Hewlett-Packard baseline during the 1950’s when women were not always accepted in the engineering industry. Her legacy will live on through her work at Hewlett-Packard and Agilent Technologies.

Patricia was born in Chicago, Illinois to parents (Samuel)Leo Badali, a barber and Gerda Nelson, a registered nurse. She lived in Chicago until her parents settled in the Crystal Lake area and bought their first home. Patricia’s sister Bonnie and her enjoyed many playful summers swimming in the lake, and during the winter, skating when Crystal Lake was frozen. Patricia always told stories of the fun she had with her sister and friends in her revered home town.

In 1950, Patricia graduated from Crystal Lake High School and then attended Moser Business College in Chicago. She commented that she took the train into the city daily for school and that school helped her learn a lot about finance. She then worked at Arlo Engineering in Marengo, Illinois for several years.

In 1954, Patricia and Bonnie’s mother, Gerta Nelson Badali died in a winter car accident. This devastated the family with her unexpected death and was a center of pain and grief for the rest of Patricia’s life. She spoke lovingly of her mother and the heart ache her death caused. Shortly afterwards, Patricia moved the California and began work at Hewlett-Packard in Palo Alto.

In 1958, Patricia met and married David L. Ichelson, MD. They have have two children. Maryjane Ichelson Gertz of Menlo Park, and Beth Ichelson of San Carlos.

Patricia spent many years as a home maker in Portola Valley. She was an active member of the Ormandale PTA, a 4H leader teaching sewing and cooking to countless 4H members through the years. She dedicated many years to caring for the family and making sure that her children received the best of everything she could provide. She spent summers up in Willow Creek fishing and camping, and in the winter the family went skiing or went crabbing at Dillon’s Beach. In 1971 Patricia and David divorced.

In 1972, Patricia returned back to Hewlett-Packard in the Test Division as a Systems Administrator. She worked very hard as a single mom. She gave everything to make sure her children had their needs met and stressed that education was very important. College was a non-negotiable in the household, everyone needs to attend when they get out of high school. She set the standard for successful strong women. Her children followed her lead and were always honor students knowing that a woman must take education seriously in order to be successful in life. In 1982, Patricia met and married Robert Williams, a painter and pro-bowler, well known at San Carlos Bowling Alley who often toured in bowling tournaments and gave lessons. Patricia and Bob were very busy balancing his tours with her work schedule. They were great soul mates and traveled all over the US. Patricia recalled that her happier times were watching him win several tournaments. Patricia had a strong relationship with all of her step-children in the combined family: Patsy, Debbie, and Linda Williams, and Suzanne Ichelson.

Upon retiring, Patricia spent her time bowling and visiting with family. She liked to bake and do ceramics with her children, grandchildren, and great grandchildren. She traveled with the family and went on many vacations. Her later years were spent on the landscape committee at Brittan Heights and baking cookies with her great grandchildren on holidays.