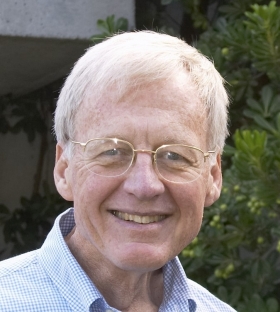 A longtime resident of Palo Alto, Dick was born in Minneapolis, Minnesota, on Oct. 8, 1940. He passed away peacefully on Sept. 7, 2019, at the age of 78. Survived by his wife Joan Raiter, daughter Holly Madariaga, son-in-law Eric Madariaga, grandchildren Ian, Leah and Owen, brother and sister-in law Bruce and Cheryle Raiter. He was a Carleton College graduate in 1962, a U.S. Navy Lieutenant Commander in Naval Aviation from 1962-1966 and in the reserves from 1966-1973. He earned a master’s degree in history and education from the University of Wisconsin in 1968 and moved to California to begin his teaching career. Joan and Dick married at St. Catherine of Sienna Church in Burlingame in 1971 and taught at the American School of Paris from 1972 – 1974 and again from 1979-1980. After teaching for 20 years at Hillsdale and Aragon High Schools, he earned his master’s in Library Science and worked as the librarian at St. Ignatius College Prep in San Francisco for 17 years prior to his retirement. Dick has played an active roll at All Saints’ Episcopal Church since 1976. In lieu of flowers, donations can be made to The All Saints’ Episcopal Church Memorial Fund, 555 Waverley St., Palo Alto, CA 94301. Friends and family are invited to celebrate Dick’s life at All Saints’ Episcopal Church on Oct. 12, 2019 at 2 p.m.