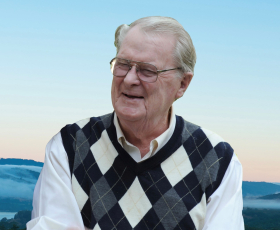 Richmond (Dick) Flatland, Jr. enjoyed a life well lived filled with lots of love and adventures with his family and friends. Dick was born to Richmond and Catherine Flatland and was raised in San Francisco where he graduated from Polytechnic High School. At Poly, he excelled in leadership and sports where he was President of the Student Body and played football and baseball. He was recruited to play both football and baseball at Stanford University where he was a star center, linebacker, pitcher, and outfielder. At Stanford, he was an active member of the Delta Upsilon fraternity. The closeness of his friendships made as a DU were exemplified by the many years the DUs traveled together with their spouses, from the 1950’s into the 1990’s. He enjoyed Stanford reunions with what would have been his 1946 graduation class and what was ultimately his 1948 graduating class as Dick’s Stanford academics was interrupted when he enlisted in the Marine Corps Aviation during WWII. After marrying his first wife Lenore in 1950 and having his first two children, Dick was called back to serve in the Korean war where he flew F9F Panther jets in Korea. He was honorably discharged in 1954 as a Captain in the Marine Corps. Upon his return to California, Dick began to run an electrical contracting company where he worked until his retirement. He so enjoyed working alongside his younger sister Patricia Mayer during his entire career. He was fortunate to fall in love and marry three times in his life and was married for 63 years in total. His first wife Lenore and he had 5 children. After Lenore passed in 1963, he remarried Joan, a mother of two, in 1965. They created a blended family and moved to Atherton. After Joan passed in 1987, he married Brenda, mother of one, and they lived happily together in Woodside for 28 years. Dick and Brenda spent winters in Palm Springs, where they enjoyed Smoke Tree Ranch, Thunderbird County Club and O’Donnell Golf Club. Dick was also very active at Menlo County Club for 56 years, from serving on the board of directors, to enjoying time with friends playing golf, bridge, and dominoes. Over the years Dick loved to watch numerous swim meets of his children and later his grandchildren. He also delighted in watching his children and grandchildren participate in many different sports and theatre productions. In the past few years, he joined the Palo Alto Club where he loved to play his Friday dominoes. Dick was known as a kind, sweet and consummate gentleman, was always well dressed, light-hearted, had a warm smile and a very quick wit. He was loved by so many and will be dearly missed. Dick had two children and one grandchild who predeceased him: his infant child Marc and adult child Kathleen and infant grandchild Meagan Macdonald. Dick is survived by his children Richmond (Peggy), Marianne (Fia), and Anne Macdonald (John); his stepchildren Fred Delanoy (Jane), Deborah Delanoy and Tara Verner (James) and his grandchildren Madeline, Mackenzie, Lexi, and his step-grandchildren David, Kristine (Ben), Madison, Alexis and Sophie and step great-grandchildren Owen, Noah, and Savannah. We will always remember Papa Bear aka Gramps warm hugs and loving smile. At his request, a private service will be held. Donations in his memory can be made to Pathways Hospice, 585 North Mary Avenue, Sunnyvale, CA 94085, or Stanford University Buck Cardinal Club, 641 E. Campus Drive, Stanford, CA 94305-6150.