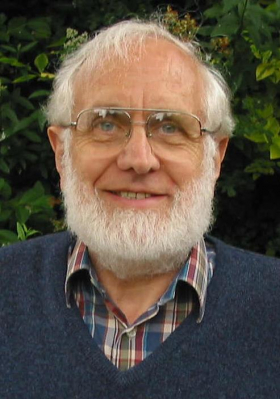 It is with great sadness that we must share news of the unexpected passing of the renowned physicist, Roy E. Rand, at age 86.

A long term resident of Palo Alto, Roy was born in Eltham, southeast London, on October 14, 1935 and attended Chislehurst and Sidcup Grammar School. Roy earned his B.Sc. and Ph.D. from University College London. He was employed at various times at University College London, Daresbury Nuclear Physics Laboratory in England, Stanford University in California, and the University of Western Australia. He worked in high energy physics, nuclear physics, accelerator physics and medical physics.

In 1981, Roy became a founding member of Imatron, Inc. in South San Francisco, as Vice President of Research and Development, where he played a key role in the development of an innovative cardiac CT scanner, making possible high time-resolution images of a rapidly moving heart. He was also involved in designing an electron beam baggage scanner and explosives detector. In 2008 he was a finalist for the American Physical Society Industrial Physics Prize. After his retirement he continued to consult on electron beam technology. As late as 2018 Roy was still writing complex technical papers about the use of high-density electron beams in medical products. Roy’s life work resulted in over 25 patents and numerous publications, including the book Recirculating Electron Accelerators in 1984, and he leaves behind a legacy of medical innovation

Roy was also an avid traveler, was passionate about camping; all over Europe, Australia and North America. He enjoyed the challenge of Sudokus, loved a good laugh, and was a dear and respected friend to many in his community. He was kind, generous, selfless, and modest. Roy is survived by his loving wife of 64 years, Hazel, children Elizabeth and Richard, and grandchildren Cordelia, Julian and Andrew. He will be profoundly missed.