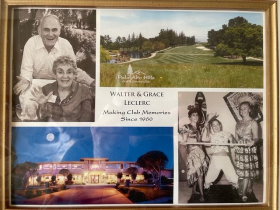 Known as "Brod" to many in the family, Walter Jr. graduated high school from Dean Academy, Franklin, MA as a member of the Class of 1947. After graduating from high school, he went to Canada and attended the University of Montreal where he graduated with a Bachelor of Science degree in chemistry in 1951.

A few years later, he was accepted to dental school at Loyola University in Chicago, IL. During dental school, Walter Jr. had lunch regularly with the secretary to the Dean of the dental school; her name was Marie Concetta (Connie) Iandolo. During his final year, Connie was running a golf tournament fundraiser for the dental school and signed Walter Jr. up in a foursome with her older sister, Grace Therese Iandolo. Little did Connie and Walter Jr. know at the time; Grace would later become his wife. Walter Jr. graduated with his Doctor of Dental Surgery (DDS) degree from Loyola University in 1955 and then left for New York City, NY to attend Columbia University. He came back to Chicago, IL and married Grace at the St. Frances X. Cabrini Catholic Church on August 18, 1956, with William Mastrianna and Connie Iandolo serving as the official witnesses. After graduating from the Postdoctoral Orthodontics Program at Columbia University in 1957, Walter Jr. was immediately drafted into the U.S. Army and the newlyweds served on a two-year tour of duty briefly in Texas and then in the Territory of Alaska, before Alaska was granted statehood, where Walter Jr. was a Captain and Grace taught military children as well soldiers who were completing their high school requirements.

At the end of their service, Walter Jr. and Grace took a Navy boat down from Alaska, got off in Seattle, and then started driving south where they finally settled down in Portola Valley, CA. They were residents of Portola Valley, CA starting in 1959, approximately five years before the Town of Portola Valley was incorporated in 1964, and were married for almost 62 years, until Grace died on May 12, 2018. The couple had four children, Michele Carmele Leclerc (Waller), Terese Grace Leclerc (Ross), Walter Normand Leclerc III, and Richard Normand Leclerc.

Of note, Walter Jr. was an orthodontist in Menlo Park, CA and Portola Valley, CA for more than 40 years, completed a Mini-Residency Program in Tempromandibular Disorders and Orofacial Pain in his continuing pursuit of professional excellence from the School of Dentistry at the University of California, San Francisco (UCSF) in 1991, was a 65-year member of USAA, and was the last living charter member of Palo Alto Hills Golf & Country Club, Palo Alto, CA recording a Tall Trees Championship with W. M. True in 1968 and hole-in-one on hole #2 some years later.

The ashes of Walter Jr. along with his late, beloved wife, Grace and son, Richard, will be spread in the backyard at the family residence in the Town of Portola Valley, CA overlooking the scenic South Bay Area in a place known by the family as “Park Place”. Those who wish to remember Walter Jr. in a special way should make gifts in his memory to Our Lady of the Wayside Church, 930 Portola Road, Portola Valley, CA 94028.