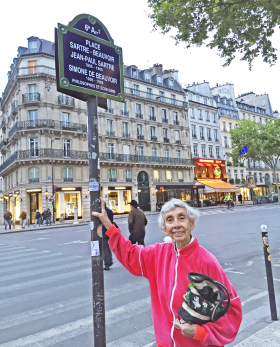 Dr. Yolanda Astarita Patterson, whose career included 40 years as a professor of French and women's studies at Cal State East Bay and who helped create and lead an international society devoted to the works of the French philosopher and author Simone de Beauvoir, passed away peacefully May 26 at the Portola Valley, California, home she had lived in for 60 years. She was 89.

It was while doing research for her PhD that Patterson became fascinated by the works of Simone de Beauvoir, best known as the author of "The Second Sex." In 1981, Patterson co-founded the still thriving International Simone de Beauvoir Society and served as its president for more than 30 years. Patterson interviewed Beauvoir twice in Paris, and in 1989, she authored the book "Simone de Beauvoir and the Demystification of Motherhood."

Patterson accumulated many honors throughout her career. In 1985-86, she was named Outstanding Professor at Cal State East Bay. And in 1997, Patterson was named an officer in the Ordre des Palmes Académiques, one of the oldest civil honors bestowed by the French government, "for services rendered to French culture."

French was not Patterson's only language. She was also fluent in Spanish, and it was while teaching a night-school Spanish class that she met Guy Kiltz Patterson, an electrical engineer. They married in 1961 and had one son, Donald. The couple celebrated 49 years together before Guy's death in 2010.

Patterson is survived by a son, Donald Patterson, and a daughter-in-law, Kendal Patterson, both of Carlsbad, California; and two grandchildren, Alexandra Patterson, who makes her home in Rueil-Malmaison, France, and Andrew Patterson, of Orange, California.