Original post made by Richard Hine, editor of The Almanac, on Feb 25, 2007 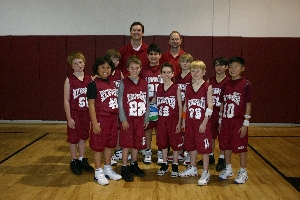 Ruby Seidl, parent and team supporter, provided this report:
Friday, Feb. 26, Portola Valley, Calif. -- The "Warriors" -- 3rd and 4th grade boys from Portola Valley, Atherton, Redwood City, San Carlos, Milbrae and Menlo Park -- recently concluded their regular basketball season at 8-0, culminating as champions of the Redwood City Boys Division 3 National Junior Basketball League.
They beat 11 other teams in the Redwood City league. Even more impressive is their post-season play-offs record, 5-0, and last Sunday, February 18, defeating a San Jose team by more than 20 points for the Silicon Valley "North" championship. They compete March 3 or 4 against the champion of the "South" division.
The undefeated Warriors finished as the No. 1 Division 3 team out of 40 North Silicon Valley division teams, including teams from Palo Alto, Los Altos and Mountain View. The North and South Silicon Valley divisions combined total approximately 80 teams, averaging 10 kids per team, about 800 boys. There are only three teams out of the almost 80 Silicon Valley teams that were undefeated in Boys Division 3.
Head Coach Jeff Tripaldi said: “In my 5 years coaching competitive youth basketball, I have yet to coach a group of boys that have come together as a team like the Warriors have. What separates them from the pack is that they respect each other and their coaches, and play smart, team basketball. Every kid contributes in some way . . . we don’t have any weak links. It has been a joy to coach these young kids. They are smart, respectful and very hard working.”
Coaches Jeff Tripaldi of Atherton and Derek Hobbs of San Carlos have a combined youth basketball coaching experience of 10 years.

The first few seconds after awakening; before I remember the virus
By Chandrama Anderson | 0 comments | 3,278 views

Can you stay healthy without making more trash?
By Sherry Listgarten | 6 comments | 2,666 views

Think about helping others in our coronavirus-affected area
By Diana Diamond | 6 comments | 2,487 views