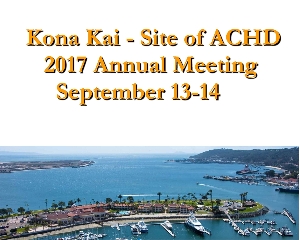 
That should be "acronym".


Great front page story in the Post today. "Board off to San Diego Resort"
That is not "fake" news.

Report Objectionable Content
Email Town Square Moderator
Posted by Starchild
a resident of another community
on Sep 10, 2017 at 1:32 pm

What a rip-off! Why can't they meet locally in their own district? If they go down to San Diego, they should do the community a favor and don't come back.

President Kane, please add the following to the Agenda for the October 4, 2017 meeting:

Public Policy
Add:
16.8 Notwithstanding other policies recited in this section, the President shall authorize no more than 2 Directors to attend the same event.


I also ask that you consider the following:

16.6 A Director shall not attend a conference or training event for which there is an expense to the District, if the event occurs after the Director has announced his or her pending resignation or after an election in which it was determined that the Director will not retain his or her seat on the Board.

This should also apply to a “lame duck” CEO.

But, PHD doesn't reimburse Directors $16,200/year for health insurance premiums like Sequoia does. Instead, they get a stipend for meeting attendance.

Report Objectionable Content
Email Town Square Moderator
Posted by Oscar Lopez-Guerra
a resident of another community
on Sep 12, 2017 at 2:25 pm

The Sequoia Health Distrct is un unnecessary rip-off. They force taxes on homeowners to do charity work with somebody's money.
Supervisor Horsley benefited from these taxes when he was on the Board, now he helps keep this ripoff going.


The district should have sent Mark Hudak, District Counsel, to San Diego to ensure that the 4 directors didn't violate the Brown Act.

Report Objectionable Content
Email Town Square Moderator
Posted by mickie winkler
a resident of another community
on Sep 15, 2017 at 3:03 pm

Hope someone is taking attendance at the all-important meetings our honorable representatives to the Sequoia Health Care District are attending in San Diego.

If these four honorable representatives were representing anyone but themselves they would disband the District which no longer has a viable purpose--except to middleman our taxes to charities, and pay themselves in benefits and cash for this complex task.

Report Objectionable Content
Email Town Square Moderator
Posted by neighbor
a resident of another community
on Sep 16, 2017 at 10:00 am

[Post removed; stick to the topic and don't attack other posters.]

Board Attendance at ACHD Events
There are three ( 3) meetings per year sponsored by ACHD that encourage trustee attendance. SHD has no restrictions on how many of these any one Board member can attend or how many of the five Board members can any of the three events.
Board members have been encouraged to make up their own minds as to which if any they will attend based solely on their own judgment and the value that they believe they offer.
SHD pays for the expenses incurred when a Board member attends a meeting including registration fee, travel expenses, hotel and sometimes meals if they are not included in the registration fee along with misc. expenses such as parking. If a Board member serves on an ACHD committee and attends meetings related to that duty, ACHD usually pays for those related costs.
In most cases related to staff, only the CEO and possibly one additional staff will attend these meetings. Staff travel and food expenses are clearly defined in the employee manual.

He added: "This approach has served us well and I am pleased by the strong interest that some of our Board members have in these activities."

As a Director on the Sequoia Healthcare District Board, I receive weekly updates from ACHD. In addition, I contact members of other districts on a regular basis and I frequent the ACHD website Web Link Here's what I found in the Members Only section:

ADVOCACY GUIDEBOOK
"Districts represent more than 35,000 employees and serve more than two million patients and individuals each year. Organizing these constituents to communicate their support for policies and regulations that benefit Healthcare Districts will get the attention of state legislators, the media and other key influencers. By building an extensive statewide grassroots advocacy network, Healthcare Districts can be involved in policy decisions that shape the future.
Now is the time to engage in an organized grassroots program. The more registered voters we can involve in a given legislative district, the more political influence Healthcare Districts can wield in Sacramento."

Your tax dollars support the ACHD.


I have no information on whether any of the "junketeers" were accompanied by their spouses.

Here is an update on the situation.

Director Griffin did not make a report! She should not be reimbursed for her “junket”

Here are the “reports” (transcribed by yours truly from meeting recording, available upon request) delivered by directors who attended the ACHD Annual meeting held at the Kona Kai in San Diego:

Director Shefren
I wanted to just comment on the, uh, wonderful educational meeting I was able to attend in San Diego, uh, in September, uh, which had some, uhm, really excellent, uh, presentations, uh, that I think were were very useful to all of us attending, uhm, in particular I was, uh, impressed with the, uh, mental health, uh, lecturer who talked about, uh, what’s available in our community and other communities and what isn’t available in terms of, uh, psych beds. There was also, uh, a very interesting session on Municipal Service Reviews, uh, with, uh, a number of handouts that I actually have captained, could show anyone who is, uh, interested. Uhm, overall, I thought the meeting was, uh, very useful to me personally, uh, and I’m glad that I was able to attend. Uhm, the only thing that I didn’t particularly like about it , was the actual resort itself, which I didn’t think was particularly, uhm, outstanding. But other than that the meeting was, uh, great and, uh, I will definitely use the information.

Director Kane
One comment I’d make about the same meeting that I also attended, is that I think it might be somewhat fortuitous that we have transportation on the agenda today, because there was a large presentation done by them and how they’re working with the healthcare community to make transportation more available, especially seniors.

Director Faro
One thing that came to fruition was the fact that we should have won the “District of the Year” award! For the second time we got bypassed. Unfortunately we won’t be back and ??????? which was driving my comment. In talking to other board members and CEO’s, it was very clear that it would be really hard to beat what we’re doing and I think a lot of the people in this room who were ?????? would probably be echoing. So thank you, Lee.


On 10/17/17, President Katie Kane was reimbursed $835.28 for "Flights and ground transportation", including $51 for cab fare from SFO to Redwood Shores. Katie must be a BIG tipper!

Boardmember Kim Griffin was more frugal, using Uber at $20.73 to get from Menlo Park to SFO. She was reimbursed a total of $358.93 for the travel expenses down to the conference. Given her failure to present a report to the Board, she may not ask for reimbursement for her trip back and other expenses. She should reimburse the district for the $358.93 she already received.

I think the other Directors should return any reimbursements received from the district for this "junket". Their reports to the board, reported in a prior post, were "lame".

State Street Market plans overhaul of its eateries as it cuts ties with Bon Appétit, triggering layoffs
By The Peninsula Foodist | 10 comments | 3,439 views

Doing more with the natural spaces we have
By Sherry Listgarten | 3 comments | 1,937 views