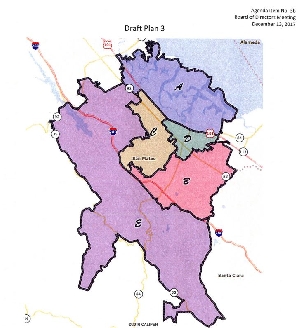 It was our October 25th meeting


The decision to align minority Zone D with the Presidential election cycle should be made by those representing the minorities whose initiative brought about the switch from at-large to zone elections. The 2 options presented in agenda item 5a would lead them to believe that they would have to accept deferral of the election for Zone D til 2020 if they chose the Presidential cycle. The assumptions used in creating those options are false!

SHD Board President Kane has not responded to my admonition.


Here are a few more details of the past events.

The Sequoia Healthcare District Board of Directors was threatened with a lawsuit in August 2017 by Melo and Sarsfield Web Link based upon the California Voting Rights Act. The Board held closed session meetings with outside legal counsel on August 23 and September 11 of 2017 to discuss a response. On September 20, 2017, they adopted a resolution of intent to move from at-large Board elections to zone elections (beginning with the November 2018 election, if feasible).
The services of demographer Paul Mitchel from Redistricting Partners Web Link were used to create 3 Zone map alternatives from which the Board could decide.
On December 10, 2017 the SHD Board adopted the Zone map(Zones A thru E) to be used in the Nov. 2018 election.
On February 7, 2017, the Board voted to put minority Zone D(includes North Fairoaks & downtown RWC) on the Presidential election with it's first election in 2020. I argued that they should have an election in minority Zone D for a 2 year seat in 2018. I feel very strongly that such an election would be permissible. I cite the 2004 Sequoia Healthcare District election where a 2 year seat for appointed incumbent John Oblak was called for by the district.

Here's an excerpt from my website Web Link relating to that election:

In November 2004, the Sequoia Healthcare District called an election to fill 2 regular seats and one appointed seat on it's Board of Directors. Jack Hickey's Citizen Advocates for Private Philanthropy sponsored 3 candidates. The candidate (Merrilee Gibson) for the appointed seat held by John Oblak was denied a place on the ballot when Oblak filed for the wrong seat and justice was denied by an association of "good old boy" legal club members. Citizen Advocates for Private Philanthropy spent $2,000 in vain to file a Writ of Mandate.
The election was "stolen" by the incumbents, when a glossy mailing funded by a $20,000 contribution from Colorado Corporation CH2M Hill apparently filtered via Jon Rubin's Peninsula Coalition Web Link to their Web Link

How about term limits to kick out the lifers?

State Street Market plans overhaul of its eateries as it cuts ties with Bon Appétit, triggering layoffs
By The Peninsula Foodist | 10 comments | 3,400 views

Doing more with the natural spaces we have
By Sherry Listgarten | 3 comments | 1,884 views