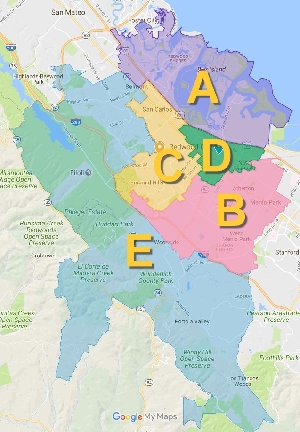 
Here is the lineup of candidates for the 3 Zones:
Zone A - Incumbent Faro and Michael Garb(two peas in a pod) vs Art Kiesel.
Zone C yours truly vs Aaron Nayack Web Link comments removed from Aaron's Facebook page can be found here: Web Link)
Zone E (Jerrymandered) Incumbent Jerry Shefren vs Harland Harrison. Harland also ran in 2002 and 2016.

I am former CEO of Sequoia Hospital and St. Mary's Hospital with an MBA in Healthcare Administration. I was Chairperson of the Hospital Board, The Healthcare District Board, American Heart Association Board for Western States, California Association of Healthcare Districts, and other volunteer Boards. In addition, I have been an active volunteer on other local, state and national organizations including Sequoia Awards, Redwood City and San Carlos Chambers of Commerce, Boy Scouts, and Lions. I am also a Fellow in the American Association of Healthcare Executives.

During my tenure on the Healthcare District Board we have supported many organizations dedicated to the welfare of over 65,000 community members annually including Samaritan House, Catholic Charities, Second Harvest Food Bank, local schools (including Redwood Shores) for nurses and nutrition programs, Ravenswood Health Clinic, CPR Training among others. I also serve on the Grants Committee which reviews all Grant requests prior to Board approval.

Re-election to the District Board will allow me to continue my efforts of giving back to our community, and help further the excellent contributions Sequoia has made in improving the health of our citizens. These contributions are essential to the welfare of our community and I would greatly appreciate your support in re-electing me to its' Board.

In the last 40 years that I have lived here, I have been committed to serving my community. I have served on the Sequoia Healthcare District Grants Committee for the last three years, reviewing grant applications and making recommendations to the board of the district. I was the CEO of StarVista, a non-profit organization here in San Mateo County before I retired in 2012. I presently serve on the San Mateo County First 5 Commission appointed by the San Mateo County Board of Supervisors .

I moved to Redwood City (Redwood Shores) in 1978 along with my wife Judy and our two children, Mindy Shelton, and Dave Garb. I volunteered to serve on several Belmont-Redwood Shores School District committees and was encouraged to run for a seat on the school board and in 1983 was elected for the first of my two terms, serving as president of the board on two occasions. Following my 8 years on the school board I have served on several nonprofit boards and continue to do so today.

I wish to continue to contribute to the health and wellness of the community that I call home and ask for your vote.

Are you aware of the percentage amount of your property taxes that funds this district?

I have spent 15 years in local government serving two terms as Mayor of Foster City. I served four years on the City and County Association of Governments Board as well as its Legislative and Finance Committees. I served two years on the League of California Cities Board and seven years on State Policy Committees. I have been a CFO and have extensive experience in financial reporting and budgeting systems.

An over-all review of the District is long overdue and the tax-paying voters, not five well-intentioned individuals, should decide its future and how the funds should be spent to benefit the area.

I have spent my career dealing with fiscal management issues and would continue to so. With your support, I will do the same on the Sequoia Healthcare District Board.

In 1946, voters formed Sequoia Hospital District. Property taxes were assessed to build and operate Sequoia Hospital.
In 1996, with Sequoia Hospital deeply in debt, voters approved it’s sale to Catholic Healthcare West.
The District continues collecting property taxes, granting money to their favorite charities.
The 2001 Civil Grand Jury questioned this activity, recommending property tax reductions unless voters approve the re-purposing of the District.
The District’s response to the Grand Jury suggested that 55% of property taxes not collected would go to the state. That’s hogwash! It was intended to scare voters. Dissolution would distribute taxes locally to the county, cities and special districts. Directors who approved that response are STILL on the Board.
After my 2002 election to the board, I found the District pursuing a fast track to relocate Sequoia Hospital. My referendum petition derailed that plan.
Now owned by Dignity Health, Sequoia Hospital recently completed a major upgrade on its historic site at Whipple Avenue and Alameda de las Pulgas. This community treasure has been preserved.
Now, voters must be allowed to decide the fate of Sequoia Healthcare District.
If it didn’t already exist, would voters tax themselves to create such a district? I think not.

I'd be honored to serve as your next member of the Board of Directors of the Sequoia Healthcare District. I'm a Developmental Pediatrician with a background in public health. I specialize in treating children with special healthcare needs such as autism, developmental delay and learning disabilities. For the past 7 years, I have advocated for local and statewide healthcare policy, serving 3 years as a board member for the Northern California chapter of the American Academy of Pediatrics.

As your representative on the Board for Zone C, I'll work to support ongoing District programs and encourage the district to expand its efforts to support child and adolescent mental health, wellness promotion and senior services. I promise to uphold the District's pledge that 100% of your taxpayer dollars go back into our community. In addition, I will work to ensure that all supported programs are using evidence-based interventions to target well defined areas of need.

I'm proud to have been endorsed by all the current Sequoia Healthcare District board members from the other zones, Supervisor Don Horsely and many other local leaders in San Carlos and Redwood City. I greatly appreciate your consideration and your vote! To learn more about me, please visit my website: www.AaronNavfack.com.

Education and Qualifications:
As a longtime resident of the Sequoia Healthcare District, current board member, physician and healthcare executive of many years, I have used my experience to help achieve the mission of the Sequoia Healthcare District: To improve the health of District residents by enhancing access to care and promoting wellness.
I believe it is important to promote and invest in good health for residents of all ages, with special emphasis on disease prevention and support of school programs to keep children healthy now and throughout their lives. I led the process of developing a new 5-year strategic plan for the District that will ensure that the activities of the District are consistent with the wishes of our residents and financially prudent. During the past 4 years I have supported a rigorous grants evaluation process with detailed follow up to
ensure grant expectations are met. If I am re-elected, I will work diligently to invest the District's tax dollars wisely on your behalf and to make sure the Sequoia Healthcare District continues to fulfill its mission of supporting a healthy community for all.

I want to abolish Sequoia Healthcare District, the office I seek.

Sequoia Healthcare District started as a hospital district. Then Directors sold the hospital, years ago, but went right on collecting the taxes for it!

How can this go on so long? Easy! The directors give some of the money to public service organizations; millions of dollars buys popularity.

Until now, the Directors were elected in at-large, staggered, elections. Recently, the District was sued for this crazy system. So, instead of giving up their seats, Directors divided the District into zones and continued their staggered elections. They just drew boundaries around their own homes, creating zones for themselves. That's right; the politicians are choosing their voters, not the other way around.

So who gets to vote, now? Areas like Portola Valley, Belmont, and San Carlos. Who cannot vote now and gets no representative at all before 2020? The minorities in Redwood City of course.

A Belmont resident for 35 years, I have been working to abolish Sequoia Healthcare District for 16 years. If elected:

I will vote to stop collecting the taxes.

I will vote to stop paying groups for support.

I will vote to abolish Sequoia Healthcare District.

Report Objectionable Content
Email Town Square Moderator
5 people like this
Posted by Lloyd
a resident of Atherton: Lloyden Park
on Aug 17, 2018 at 2:05 pm

"to run for 3 lucrative seats this November"


Mr. Hickey: you've gone from an avowed Term Limits blowhard, to just sitting in your LUCRATIVE seat for a dozen years.

Isn't it time to vacate the seat, per your (former) principles?

Or will you stay and remain a hypocrite to your own support of term limits?

It's Shameful, the gyrations of career politicians..

Report Objectionable Content
Email Town Square Moderator
5 people like this
Posted by Lloyd
a resident of Atherton: Lloyden Park
on Aug 17, 2018 at 2:06 pm

Disgusting. Back in 2002, you had just campaigned FOR term limits.

Report Objectionable Content
Email Town Square Moderator
19 people like this
Posted by Yet More Of The Same Nonsense
a resident of another community
on Aug 17, 2018 at 2:06 pm

Let us remember, everyone: Jack Hickey insisted -- INSISTED -- that he would not seek another term on the Sequoia Healthcare District board. INSISTED.

Remember that when you vote on November 6. Vote for Aaron Nayack, and send the spamming, nonsense-spouting Hickey out!

Jack Hickey: are you FOR or AGAINST the term limits you previously were in favor of, as questioned above?


personally, I like the candidate statements that reflect the experience of those in related professions (medical, etc..)

Report Objectionable Content
Email Town Square Moderator
Like this comment
Posted by Yet More Of The Same Nonsense
a resident of another community
on Aug 18, 2018 at 4:29 pm

@9th ward -- Good luck getting an answer of any kind from Hickey.

For someone who insists that he's not a career politician, Hickey sure acts like one.

Dining outdoors in Santa Clara County? You'll have to keep your mask on for most of the meal
By Elena Kadvany | 26 comments | 12,294 views