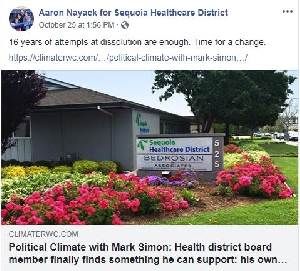 Jack Hickey's comment about Mark Simon's article is a credible one.

Mark Simon has a history/resume of being a journalist and reporter, He knows the power of words and he knows what is true and what is false. Recently his publication wrote a false story about a former Redwood City Police Officer involved in a Domestic Violence call and a 17.5 hour standoff with the San Mateo County Swat TEAM.


Report Objectionable Content
Email Town Square Moderator
Posted by singing to the classics
a resident of Menlo Park: Downtown
on Nov 9, 2018 at 4:14 pm

From one conspiracy theory to another.

Guys, have a loved one read your posts and explain to you how they look to mainstream folk.

Rather painful to read these folks. Oblivious.


Jack - Thank you for your many years of public service.

Report Objectionable Content
Email Town Square Moderator
Posted by Duke
a resident of Menlo Park: other
on Nov 12, 2018 at 2:14 pm

Is this the Three Achievements guy?

One politician thanking another. Got it.


Duke - what have you done for our community so that we can properly acknowledge your efforts?

Report Objectionable Content
Email Town Square Moderator
Posted by Duke
a resident of Menlo Park: other
on Nov 12, 2018 at 3:18 pm

Nice misdirection. What has hickey done?

Asked his 3 greatest achievements - he gave only 2: destroying a nurse program and getting more votes in 2012.

He claimed he wanted dissolution but never stepped out of the way for others to get the job done. He was a useless millstone around their necks.

But since you asked... Me? I put in about 300 hours a year. But I'm not on here trumpeting about that - I do it for community, not recognition. So I'm out. Enjoy,as the most prolific posters, your politician mutual love fest.

Thank you for your service.

Report Objectionable Content
Email Town Square Moderator
Posted by No Sore Losers
a resident of another community
on Nov 15, 2018 at 1:52 pm

Uh, Jack -- Aaron Nayfack won the election. Nothing you do or say, now or in the future, will change that.

If you want to continue to point to "hit pieces" as the cause of your loss, that is your right. But you must also know that it makes you look like a very, very sore loser.

Acknowledge what happened, and MOVE ON.

The voter fraud comments, organizations buying votes, etc. in the other thread was pretty 'interesting', Jack.

Report Objectionable Content
Email Town Square Moderator
Posted by singing to the classics
a resident of Menlo Park: Downtown
on Nov 17, 2018 at 2:40 pm

These fringe posters that imply fraud have the same credibility as Trump.

Report Objectionable Content
Email Town Square Moderator
Posted by pogo
a resident of Woodside: other
on Nov 18, 2018 at 6:32 am

pogo is a registered user.


The only thing our government fears more than an irate voter who is against the establishment is an elected official who feels the same way.

Jack Hickey's principal crime was wanting to shift the work of the Sequoia Hospital District - a district that was specifically established to oversee a hospital that the county no longer owns! - to other elected officials. The district now simply redirects taxes to a bunch of non-profits and charities. That's not a bad thing but we hardly need a bureaucracy to do that.

Thank you for your many years of service, Jack. The District can now go back to "business as usual" without challenge.

An extra helping: Local restaurants unite for two days of fundraising for AAPI group
By The Peninsula Foodist | 0 comments | 1,176 views