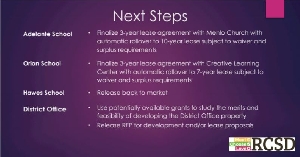 Like this comment
Posted by Jack Hickey
a resident of Woodside: Emerald Hills
on Jul 1, 2019 at 1:47 pm


This excerpt from 3D Strategies website is key to understanding what RCSD is doing. They plan to utilize surplus properties which have benefited from Bond measures passed under the 55% vote requirement to generate general fund revenue. See: Web Link

"The shortage of qualified teachers is at historic levels and District’s need to find innovative ways to recruit and retain key staff. Using underutilized land and creative financing to provide affordable housing is quickly becoming a key part of every District’s recruiting and retention programs.

Real estate is often overlooked due to the challenge that can come along with trying to gain financial benefit from the property that the organization controls. 3D Strategies can help you to navigate the difficulties of converting your land or property to an asset, and help you to build strong financial sustainability – and affordable workforce housing – for your organization for years to come."


The 7/11 Committee was given the following as guidance for reviewing proposals:
Criteria for Review of Proposals
• The time-sensitive need for the District to garner income for District
• The need for the District, to the extent possible, to assign responsibility for the
maintenance of these properties to the respective tenants
• The impact, if any, on the District’s ADA
• The impact on neighboring property owners
• The benefits for the overall community
• The Committee may also provide a recommendation for longer-term
leases with certain tenants for certain properties

Initially, Stratford Schools bid was $350,472/year more than the Menlo Church bid.
The fact that a Stratford Schools study predicted approx. 6% public student transfers, which would impact ADA of the district, led the 7/11 Committee to recommend the following:
• Reach out to Menlo Church to see if they could significantly improve their offer to approximate that offered by Stratford
• Update Stratford on Committee Recommendations

IMHO, the effect of a further decline in enrollment would be a net benefit to the district.I have made the CDE aware of the districts activities. CDE should deny the RCSD request for a waiver of bidding procedures. The lease should be awarded to Stratford Schools.


The link to the 7/11 committee report above is broken. Here is a good link:
Web Link


Don't know if that link ever worked. I usually check my links, but I'm not perfect. If any readers can confirm whether the link ever worked, I would appreciate the info.

Didn't work. And someone needs a hobby.

The Redwood City School District (RCSD) Board of Trustees will discuss the steps the school district is taking to lease district surplus properties. These properties are 3150 Granger Way (formerly Adelante), 2950 Fair Oaks (formerly Fair Oaks), 909 Roosevelt (formerly Hawes), 815 Allerton (formerly Orion), and the District Office at 750 Bradford Street, in Redwood City. A previous decision has placed two charter schools on the Fair Oaks site and the possibility of studying the District Office in downtown for teacher and staff housing.

These properties are now vacant due to the RCSD Board of Trustees’ vote in November of 2018 to merge and move programs and consolidate schools as part of the district’s process called Planning for our Future to rethink how to focus on the organization’s mission: Educating Every Child for Success.

The Planning for our Future process was undertaken because an independent financial consultant concluded that with declining enrollment, RCSD could not sustain 16 schools with 7,500 students and specifically schools with an enrollment of less than 400 students. The district has lost close to 2,000 students in six years as a result of families moving out of the Bay Area due to the high cost of living and three charter schools that operate within the RCSD attendance zone.

RCSD has formed what is known as a 7-11 Committee, comprised of faculty, staff, and parents/community members, which is a California law required committee with the objective to advise the Board of Trustees in the use of real property no longer needed for school purposes. (Education Code Section 17388).

As RCSD moves through the process to find tenants for these properties, the district invites friends and neighbors to hear an update from the district’s consultant, Mr. Dominic Dutra of 3D Strategies, and to provide their input for their future new neighbors.

Couples: Are you Committed to your Vows or Dysfunction?
By Chandrama Anderson | 2 comments | 2,412 views

Do peaceful protests do any good? How about the more violent ones?
By Diana Diamond | 9 comments | 1,511 views