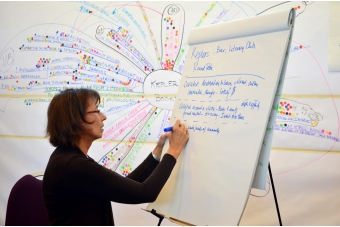 Jean Forstner, Kepler's director of community relations, jots down her group's ideas at a three-day think tank held to map out the independent bookstore's future. ==I Almanac photo by Daniella Sanchez.==

Construction noise drifted up to the fourth-floor outdoor patio of Palo Alto's Oshman Family Jewish Community Center as jackhammers ripped up concrete down the road.

Construction noise of a different sort filled the air indoors, as words dissected what Kepler's Books and Magazines used to be, and built an outline of what it could be.

"Back to the future with a community connection," one small group chanted as a Greek chorus. "... A center of amazing innovative detection /Is Kepler's modern resurrection."

About 80 volunteers attended the Future Search event from July 26 to 28. Some, like Elaine Katzenberger of City Lights Books, were publishers. Some worked at Kepler's, some were donors, some were writers and others, like local political figure Gail Slocum, readers. All were dedicated to the task of reinventing the Menlo Park community bookstore.

Future Search co-founder Sandra Janoff explained that the diverse background of the participants is a hallmark of the methodology. "You want to get the whole system into one room."

The event was the first held for an independent bookstore. She glanced at Kepler's new leader, Praveen Madan, who was engrossed in in an energetic discussion, and said, "It takes courage to shut everything down when you're in the middle of the day-to-day firefighting."

Mr. Madan and wife Christin Evans came on board Kepler's in January when the Menlo Park store was facing closure again. Their transition team restructured operations and about $1 million in debt, allowing Kepler's to start turning a small profit.

In July the bookstore temporarily shut down to handle smaller details such as restocking inventory, and larger ones such as figuring out where the store goes from here.

On Friday afternoon at Future Search, the participants, split into nine groups, presented visions of Kepler's in 2020. The scenarios were rooted in the idea of the bookstore as a community living room, integrated not only with e-book and print-on-demand technology, but also with the intellectual innovation of Silicon Valley.

Some questioned Mr. Madan's vision of a community-owned, for-profit bookstore alongside a nonprofit organization that offers author events, workshops, and other resources.

By the end of Saturday's session, Mr. Madan said, people committed to taking action, such as finding new ways to leverage technology in the bookstore. Other participants will develop programs for local authors or build philanthropic support for the new nonprofit.

On his personal "to do" list for the next six months: Define a clear mission and identity for the new Kepler's; launch classes and new literary events; and improve the rewards for belonging to the store's membership program.

"The overriding goal of Future Search was to expand the circle of committed and engaged stakeholders who are going to work with Kepler's and other community bookstores to build a better and sustainable business model," said Mr. Madan, who described the event as a success.

You can't set the direction of a store by committe or consensus. It takes an individual with a vision.

Singapore's oldest cafe was about to open in Palo Alto. Then, the coronavirus hit.
By Elena Kadvany | 1 comment | 4,241 views

A Pragmatic Approach to A Trillion Trees
By Sherry Listgarten | 4 comments | 4,103 views

Repairing a Disagreement with your Beloved & “Physical” vs. “Social” Distancing
By Chandrama Anderson | 2 comments | 2,771 views

The University of California’s flexible policies during COVID-19
By John Raftrey and Lori McCormick | 6 comments | 2,689 views