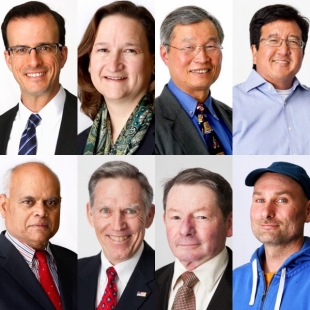 Like this comment
Posted by Menlo Park Resident
a resident of Menlo Park: Sharon Heights
on May 5, 2016 at 4:15 pm

Peter Ohtaki has my vote. He is the voice of moderation, respects everyone's opinion, can work with just about anyone, never loses his temper, and comes up with well reasoned and pragmatic solutions.

Like this comment
Posted by Republicans in Menlo?
a resident of Menlo Park: other
on May 5, 2016 at 4:24 pm

Ohtaki is a Republican - fair enough. Does he support the policies of his national party? Who will he vote for, in the presidential election in November?

Personally, I can't see supporting someone who views all the available information and then still votes for the wacko trump. It's a judgement issue.

How do you judge the donald, Mr. Ohtaki?

Like this comment
Posted by No evaluation of records
a resident of another community
on May 6, 2016 at 9:41 am

Most of the candidates have records as local politicians. But no one has presented a real evaluation of what all of those politicians have actually done in office. Candidates are free to make any claims - true or false. Their campaign pieces will surely be a bunch of BULL. Maybe the newspapers will do more for the November top-two runoff. Meanwhile, we may have to look at the identity of supporters and campaign contributors we recognize and any insight local residents manage to get into the press.

Report Objectionable Content
Email Town Square Moderator
58 people like this
Posted by Menlo Moderate
a resident of Menlo Park: Central Menlo Park
on May 6, 2016 at 12:41 pm

I don't care that Ohtaki is a Republican and whom he votes for President is nobody's business and is certainly not a relevant criterium. I am voting for Peter Ohtaki because he is a consensus builder and examines all sides to an issue before making a decision. He also displays extraordinarily good judgment and us well connected to the community's needs and desires.

I am also voting for Democrat Ray Mueller for a second term for city council. Ray has done a great job. Is he voting for Hillary? Who knows and who cares. It is what Ray does on the dais is what is causing me to vote for him. Anything else really does not matter.

Report Objectionable Content
Email Town Square Moderator
3 people like this
Posted by Menlo Voter.
a resident of Menlo Park: other
on May 6, 2016 at 4:25 pm

Report Objectionable Content
Email Town Square Moderator
2 people like this
Posted by Apple
a resident of Atherton: other
on May 6, 2016 at 9:41 pm

I'll vote for anyone who is going to stop HSR. It's time CA spent the HSR money on more immediate and effectual ways to reduce congestion and improve the environment.

The Bay Area is clogged in traffic. We need better public transportation and roads now. BART, Caltrain, and county bus systems all have to scrap for more money while HSR gets showered in tens of billions. It makes no sense to spend so much money on long distance transit when there are so few complaints about it, yet there are numerous complaints about regional transit.