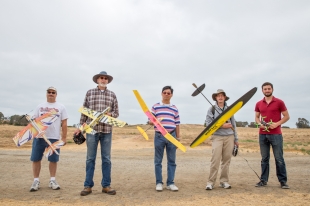 So let me get this straight; the decision to be force an outright ban rather than to regulate - by designating acceptable hours or days - is based on the fear that these RC gliders and tiny helicopters "could hurt people or wildlife or start fires". Is there any instance in all the time people have been flying them there that this has happened? I still see the same raptors I've ways seen there and the surely aren't scaring the jack rabbits anymore than any other plane flying over. Bedwell shouldn't be the first choice for those seeking serenity and communing with nature;there are lots of places in the Bay Area tondo that. It was intended to be an urban recreational area suitable for multiple uses. The counsel has chosen the easy way out to placate the few who fail to recognize the Bedwell fronts a very busy section of roadway and is never going to be quiet. I'm sure the Menlo Park PD is thrilled with their new responsibilities.

MP has a new branding campaign: "No fun of any kind!"

Wait until the fed and state regs are decided, with good public input, and some time spent studying this problem, and revisit. Just because someone can afford a new toy doesn't give them some right to inflict on others.

As a previous poster said:

"Yay! the nerd with the obnoxious drone is back!"

Said No One Ever.

I've gone to Bedwell Bayfront Park a few times to fly kites ... the drone and rc aircraft operators didn't seem to be bothering any birds (especially the planes ... some of the gliders aren't any more intrusive than a kite). I'm surprised the ban extended to this park. I'm not sure why they didn't stick with a few appropriate rules.

Report Objectionable Content
Email Town Square Moderator
4 people like this
Posted by Trunks
a resident of another community
on Aug 29, 2016 at 2:07 pm

I was at Bayfront Park Saturday morning and got a chance to meet some of the RC flyers. It is a shame that the city council members did not bother to survey the area and I can tell the way the questions were asked during the live webcast did not bother to visit Bayfront Park. I looked around at the park and I did not see any other species of bird nesting in the park. The only birds I saw was a Canadian Geese and Pigeons grazing in the field and I have video proof that the environmentalist was providing miss leading information to the city council. I see no reasons for not allowing them at least fly a non motorized gliders since it is quiet and much safer. At least the other parks such as East Bay Regional Park and some school districts with permission during the weekends only allow them to fly non motorized gliders.


Report Objectionable Content
Email Town Square Moderator
10 people like this
Posted by Throw
a resident of another community
on Sep 2, 2016 at 9:06 am

Me and my friends are disappointed because we can not fly our 10 oz. RC controlled hand launch gliders. That is about the weight of a hamster and could easily be knocked out the sky by a kid. They also are very bird friendly and I have never heard of a bird getting hurt or even bothered by a glider.

Silicon Valley is Mecca for engineering talent. It is too bad that Menlo Park does not let the safest forms of this engineer friendly hobby even exist. They really should have waited before doing such a heavy handed regulation to see the real cost in problems caused before eliminating the enjoyment we used to be able to have in at Bedwell Bayfront Park.

Report Objectionable Content
Email Town Square Moderator
2 people like this
Posted by Long Disappointed
a resident of Menlo Park: Menlo Oaks
on Sep 3, 2016 at 8:18 am

yet another example of Menlo Park city government out of touch with all reality. Just the latest example. Our downtown is a wasteland, our parks are off limits to our own citizens, our streets are not welcoming to business or the public. Look at any other city on the peninsula...all have undergone major renovations and expansions to be welcoming to businesses and the citizens. We have shuttered businesses, rug stores and real estate offices.... and the largest collection of abandoned car dealerships in America. Menlo Park city government continues to keep its head in the sand, and run our city into the ground.

Gliders are safe and quite aircraft. This is super sad.

I wish we have a system where we can change individually how our property taxes are distributed among different recipients. I'd allocate everything in my bill to schools, police, and fire and exactly $0.0 to our parks, so called "city planning" and other "activities". Our downtown is a zombieland, El Camino in MP looks like the worst streets of Detroit, but our "city council" is banning battery powered toys from parks. Like there was not enough stuff banned from parks already.
Our city apparently believes that money is being dropped on them from aliens spacecrafts.