Funeral services set for Friday, March 31, for veteran credited with saving his ship after kamikaze attack 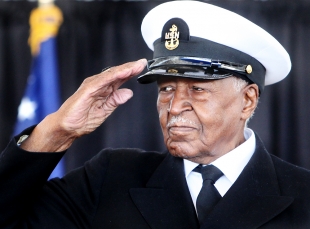 Carl Clark was a great man, who made heroic sacrifices for our country. He was truly deserving of the Congressional Medal of Honor but was denied it because of the color of his skin. Menlo Park has suffered a great loss.

What a great man. Fantastic story of heroism. Very sorry to learn that he was not properly recognized for his service, but glad it was eventually (partially) rectified. Great photograph as well. Love to see these stories about seemingly "ordinary" Americans serving, getting it done, sacrificing and ultimately doing extraordinary things. Godspeed.

Bless his good and brave heart. His actions bespoke the content of his character long before it was finally recognized. Condolences to Karen Collins from a former Menlo Park resident who salutes her Dad.

SteveC is a registered user.


RIP Carl, you are a hero for all your actions.

Report Objectionable Content
Email Town Square Moderator
6 people like this
Posted by Rose Bickerstaff
a resident of Menlo Park: other
on Mar 18, 2017 at 7:22 am

Mr. Clark is not only a hero, but was a beautiful gentleman and loving
human being. He served in World War 11, fighting for this country, not
thinking about the color of anyone's skin that he was protecting.
Wouldn't it be great if we all could think about that in our every day
lives, instead of practicing racism. Mr. Clark, along with many of his
fellow soldiers suffered mighty!! Sorry Mr. Clark for the abuse you
and others endured not only the war, but the experience of racism while
fighting the War.!!

Report Objectionable Content
Email Town Square Moderator
2 people like this
Posted by M. Lynett USN-Ret
a resident of another community
on Mar 30, 2017 at 8:35 am

Can you Pay to Reduce your Carbon Footprint?
By Sherry Listgarten | 8 comments | 2,358 views

You Can Help: Scents and Migraines
By Chandrama Anderson | 0 comments | 2,029 views