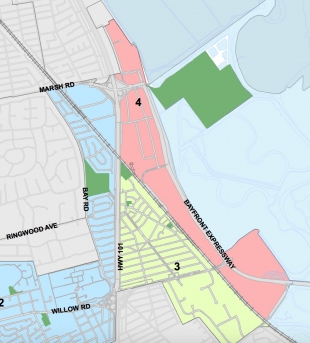 The proposed new Menlo Park Police Department unit would be made up of five officers and one sergeant who would patrol the city's easternmost parts, shown in pink. (Map courtesy city of Menlo Park.)

Of course they do, because they're sellouts continuing their history of selling out.

3 people like this
Posted by Smart&Fearless
a resident of Menlo Park: Sharon Heights
on May 3, 2017 at 2:57 pm

Take the money with no strings and fund more police.

Personally I think a good compromise woule be for Facebook to give money to the city for other services and let Menlo Park hire new officers out of their own budget.

I agree with Brian, this sets a dangerous precedent and I am surprised that this could even be legal in the USA never mind ethical. It will put the Officer who stops a Facebook executive leaving the Campus with a few extra drinks on board in a precarious position. How do we know what other influence Facebook will place on this police unit they fund?

Better donate the funds to Menlo Park to use wisely (and no not on any more Yoga sessions for MPPD in Bend, OR ! - still scratching my head on that one - total waste of money).

Report Objectionable Content
Email Town Square Moderator
5 people like this
Posted by donate?
a resident of Menlo Park: other
on May 4, 2017 at 9:50 am

@Brian and @DcMcglynn - if the money is flows into the City's general fund as a sales tax in lieu payment as part of the development agreement amendment, it will be co-mingled with all city revenues. Then the City Council would then have to take a second action to approve police officer funding in a normal budgetary if the Chief made a showing it was required.

The nuance here is that the payment from Facebook is no longer a "gift" but rather, becomes an in lieu sales tax payment created from an obligatory contractual requirement associated with the development agreement.

Report Objectionable Content
Email Town Square Moderator
4 people like this
Posted by Citizen
a resident of Menlo Park: Belle Haven
on May 4, 2017 at 10:47 am

Now combine fire and police together. Move fire station to where Facebook wants to put the police facility. City, don't sell the parcel to the fire district, force them to move! Finally, help our Bell Haven Community. Show that you care!

Report Objectionable Content
Email Town Square Moderator
5 people like this
Posted by Peter Carpenter
a resident of Atherton: Lindenwood
on May 4, 2017 at 10:58 am


This is all really strange.

The City's own ConnectMenlo Fiscal Impact Analysis October 15, 2016 study claims that the revenues from the M2 development will provide sufficient funding for public services such as police, libraries and fire.

That Fiscal Impact analysis shows that the City will get $3,715,100 more annually from these developments.

Why does the City now not have enough revenue?

Report Objectionable Content
Email Town Square Moderator
2 people like this
Posted by Why not enough revenue
a resident of Menlo Park: Central Menlo Park
on May 4, 2017 at 1:25 pm

My guess is the pensions. The state just increased employer pension contribution rate for the next few years. I wouldn't be surprised if that ate up any expected Menlo Park excess funds.

If you believe that CalPERS rates won't keep going up... I have some lovely bayfront swampland for sale. The investment performance (which, incidentally, tends to lag a basic indexing type approach) is still below the new 7% actuarial rates they're using.


Report Objectionable Content
Email Town Square Moderator
3 people like this
Posted by Menlo Voter.
a resident of Menlo Park: other
on May 4, 2017 at 9:52 pm


"The investment performance (which, incidentally, tends to lag a basic indexing type approach) is still below the new 7% actuarial rates they're using."

The index should be more like 3%. When reality finally catches up with these idiots, the time bomb goes off. What then?

If Silicon Valley stops subsidizing the rest of the state, the whole house of cards comes down... the current insanity only works because of tech.

Report Objectionable Content
Email Town Square Moderator
3 people like this
Posted by Rate of Return
a resident of Menlo Park: Felton Gables
on May 5, 2017 at 10:18 am

Historically, stock market return as measured through a common index, such as S&P 500, is around 7%. A stock mutual fund could then generate an average yearly 7% return.

However, that assumes close to 100% investment in equities. And CalPERS cannot maintain 100% equity investment. It has to balance the dual goal of maximizing long term return and maintaining an income stream for current retirees that is less risky short term than stocks. A significant percentage of its investment must be in bonds to do so. And bonds will never get close to a consistent 7% yearly return.

Report Objectionable Content
Email Town Square Moderator
1 person likes this
Posted by Menlo Voter.
a resident of Menlo Park: other
on May 5, 2017 at 6:18 pm

And yet they continue to lie and claim they can. Why?

Flying: How much is enough? It's personal.
By Sherry Listgarten | 9 comments | 2,150 views