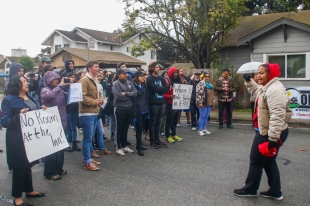 Patricia Finau Lopez, right, leads protesters as they chant "we will not move" on Weeks Street during a protest against the city's notice to tow RVs on Nov. 15, 2017. Photo by Veronica Weber.

About 50 protesters blocked a tow truck Wednesday morning that came to haul away RVs in East Palo Alto, where sewage from the vehicles has clogged a storm drain and, city staff said, created a public health hazard.

The protesters said city police and Assistant City Manager Sean Charpentier handed out tow notices on Tuesday at about 3 p.m., directing people to move their vehicles by 8 a.m. this morning.

Many RV residents on Weeks Street illegally emptied their chemical toilets onto the street and the waste entered the storm drain, city staff said in a press release Wednesday.

Prior to serving the eviction notices, city staff had told the RV dwellers about disposal stations in Redwood City, Mountain View and Sunnyvale where they could dump waste from their vehicles.

The RVs and cars in the 1100 block of Weeks Street have been housing working parents, children and the elderly, among others, protesters said.

The action follows city leaders' recent directive that vehicle dwellers should be removed from city streets, most notably on Weeks and Bay Road, near the Baylands.

"Many of these vehicles cannot be moved on such short notice. So the city is impounding people's homes," protest organizer Patricia Finau Lopez, who lives on Weeks, said in a press release.

Wednesday's evictions are an emergency measure for the area, which is prone to flooding, in response to today's forecasted rain, Lopez said from the protest site.

About 1 to 2 inches of rain is expected in the area for the next few days, which could spread the sewage, according to city officials.

City signs posted in the area indicated the evictions were for emergency and health and safety reasons. City officials said Weeks Street has been closed out of public safety concerns.

The West Bay Sanitary District was called to pump the storm drain, which was found with sewage and will need to be disinfected, city officials said.

The city has brought in staff from LifeMoves, a Menlo Park-based housing support nonprofit, and other social service providers who were able to assist some residents, city officials said.

Ravenswood City School District Superintendent Gloria Hernandez-Goff said that as of last week, 58 percent of district students are homeless, some of whom live on Weeks in the RVs.

The district has responded by providing 1,200 to 1,500 dinners and serves breakfasts and snacks to children who come to school with empty stomachs. The district has also installed washers and dryers so that homeless families can do their laundry.

"Gentrification has really hit us. It's running us over -- tire tracks on our backs," she said.

The homeless in the district's count includes those who sleep on someone's floor or sofa and don't have a place of their own; many live in RVs, Hernandez-Goff said. The result is they cannot concentrate in school because they are scared, hungry or are unable to sleep soundly through the night. Their parents are working two or three jobs, she said.

"We do everything we can in the schools, but it's not enough," she added.

Adrian Bonilla lives in one of the RVs with his wife and two grandsons. He said they used to sublet a room in a house on nearby Poplar Avenue, but the other occupants from whom they rented would not allow them access to the kitchen and they could not park nearby. "We could only use the bathroom," he said.

The family has lived in their RV for the past three months. Last night they moved their vehicle one block over after police came and told them it would be towed in the morning. It would cost them $1,000 to retrieve the vehicle, he said police told him.

Bonilla works as a mechanic; his wife works for the Ravenswood school district driving a van for children with special needs. The couple work second jobs as Uber drivers, he said. They live in their RV because it is so difficult to find an affordable place to rent, he said.

"The cheapest house is $4,000 a month and it is only two rooms, and sometimes there is no parking," he said.

Protest organizer Marlayna Tuiasosopo said people worked late into the night to push nonworking RVs around the corner so they would not be towed. The problem is only going to shift without real solutions, she and others said.

On Wednesday morning, one of the last RVs left on the street was getting a jump-start from a friend with a car.

Three brothers and an uncle live in the RV. Noel Salinas and Guillermo Pasqual, brothers, said they all work in construction in surrounding cities. They used to have an apartment on Bay Road, but they lost it after Pasqual's wife divorced him, he said.

Pasqual has attended meetings at St. Francis of Assisi Church regarding the city's consideration of an ordinance regulating RVs and oversized vehicles. He said he plans to attend another meeting at the city Wednesday night when the Public Works and Transportation Committee will discuss possible ordinance recommendations at 7:30 p.m.

"They don't permit us to stay here, but they don't tell us where we can go. The city is not helping us," he said.

Nearby resident Mark Dinan said he sympathizes with the RV dwellers, but the unregulated presence of so many portable dwellings has had serious health consequences for him and his neighbors.

"Most times my biggest complaint is stepping on human feces on the Bay trail," he said. "This has become a lawless zone," he said, noting that others have come to the area to party who are not living in the RVs.

"A lot of people living here are not East Palo Alto residents. We're talking about people who have been pushed out of Palo Alto and other cities," he said. "Everybody has empathy for this situation, but we can't let East Palo Alto become a hazard zone for residents. ... This is a health and safety issue, not a social issue."

Adjacent to the Weeks site is a property owned by Facebook CEO Mark Zuckerberg and his wife Dr. Priscilla Chan, founders of the Chan Zuckerberg Initiative. The couple plans to turn the space into the long-term home of The Primary School, which serves children in pre-K through eighth grade.

Trash, beer bottles and other debris littered the site of the future school on Wednesday morning. Someone left an abandoned barbecue grill near the fence.

Dinan's said his concern is when human waste and other materials infect the community and the wetlands.

"There's got to be better conditions for people to live in. It's literally in my backyard," he said.

Michael Mashack, who is on the city's Second Unit Task Force (a group dedicated to addressing issues surrounding accessory-dwelling units), said he would like to see the city come up with a solution. He was walking his dog on Weeks when he saw the RVs were gone.

"I was a little surprised and disappointed," he said of the signs the city had put up and the short notice for the vehicle dwellers to leave.

He pointed to the crowd of protesters, noting that the city should engage in conflict mitigation that could have prevented the anger and distress people were now feeling.

"I would love to see some modernization, but make it work for us" rather than making people have to fight against outside pressures, he said.

Hernandez-Goff said that she and East Palo Alto Pastor Paul Bains have been working with LifeMoves on a safe-parking initiative where families can have a safe place to stay. Their proposal would require multiple parking lots around the city where there could be sanitary facilities and security.

"If the city can't afford port-a-potties and dumpsters, we can find funders," she said.

Some protesters pointed to the Chan Zuckerberg Initiative as an example of the kind of influx from big-money outside sources that are changing the community in ways that are forcing out longtime residents even while they seek to improve the community. But Hernandez-Goff said that initiative representatives have been meeting with the school district and community leaders.

"They have been helpful in trying to find solutions, but we need land, and we need to do something right now. Planning for home building is wonderful, but that takes two to three years," she said.

A Pragmatic Approach to A Trillion Trees
By Sherry Listgarten | 2 comments | 3,624 views

The University of California’s flexible policies during COVID-19
By John Raftrey and Lori McCormick | 6 comments | 2,460 views

Repairing a Disagreement with your Beloved & “Physical” vs. “Social” Distancing
By Chandrama Anderson | 1 comment | 2,363 views