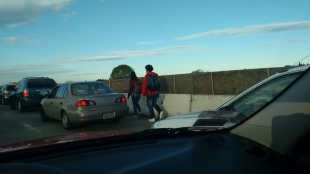 Menlo Park is a civilized city. We must do better for our kids.

There is pedestrian bridge not far away from Williw. Pedestrian, Karl... Thise "kids" just lazy to walk extra to be safe.
Let me guess: its again Zuk's fault ... right?

21 people like this
Posted by kbehroozi
a resident of Menlo Park: Suburban Park/Lorelei Manor/Flood Park Triangle
on Mar 20, 2018 at 9:23 am

kbehroozi is a registered user.


These kids are walking at least 1.5 miles to school each day. You really want to call them lazy?!

We need to fix this.

The bike bridge is halfway between Willow Road and Marsh Road. It can easily add 1.5 miles to the route. Web Link

Report Objectionable Content
Email Town Square Moderator
8 people like this
Posted by Cayo
a resident of Menlo Park: other
on Mar 20, 2018 at 5:12 pm

Dear EMP: The pedestrian bridge is NOT advisable, it poses a threat of isolation, there have been attacks and rapes along that bridge for decades. How safe to you feel there? Please, let's add a shuttle bus more often.

Jen Wolosin is a registered user.


Thank you, Belle Haven Action, for your advocacy on this issue.