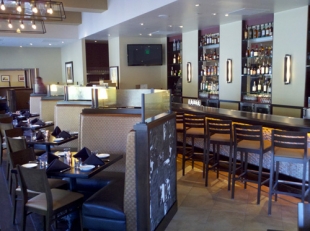 We have eaten there on five occasions and have found the food to be mediocre at best. The steak dishes we had were, quite frankly, not very good. I hope they improve the menu.


We had dinner there once. Over priced steak. Sides were a la carte and expensive. And the sides were extremely over salted. as JBCHAM said, "mediocre at best". Let's hope they come up with something better next time around.

As in the case of a group dinner upstairs at Left Bank, both a group lunch and also a group dinner in the back room at LB Steak involved a better menu, better prepared food and better service than at individual meals.

Betty T is a registered user.


The happy hours were great. $6 appetizers $6 drinks. I am sorry the people who worked there have lost their jobs.

Report Objectionable Content
Email Town Square Moderator
3 people like this
Posted by Menlo Voter.
a resident of Menlo Park: other
on Apr 3, 2018 at 6:42 pm

apparently I'm not the only one that didn't like the place.

Good Bye LB Steak. Terrible place. Hope they can reinvent a better place. Doubt it, but maybe. Sorry people lost a job but if they are good wait staff they won’t have a problem finding another gig.

Report Objectionable Content
Email Town Square Moderator
2 people like this
Posted by Potter
a resident of Menlo Park: Central Menlo Park
on Apr 5, 2018 at 8:25 am

1. Which Steak cut did you order?
2. What temperature did you request?
3. Where is your favorite place for Steak?

Complaints from the peanut gallery are tasteless at best...might you add some context for your audience, since you seem to have one (or want one)?

Report Objectionable Content
Email Town Square Moderator
4 people like this
Posted by Menlo Voter.
a resident of Menlo Park: other
on Apr 6, 2018 at 6:41 am

"2. What temperature did you request?" Medium rare

"3. Where is your favorite place for Steak?" Right now, home. I can cook the same steak the way I like it and not pay a ridiculous price for it. When I find a steak house that doesn't charge stupid prices I'll let you know.

Execs from my company have had several dinners at this restaurant (not sure if it was private mtgs or regular dining)
1. That shouldn’t matter
2. They’ve never come back saying ‘That was great’.
Never been tempted to dine there because I’ve never heard it was great.

Anne Le Ziblatt, formerly of Tamarine and Bong Su, is back with a Vietnamese noodle bar in Redwood City
By Elena Kadvany | 7 comments | 3,512 views

You Can Help: Scents and Migraines
By Chandrama Anderson | 0 comments | 737 views