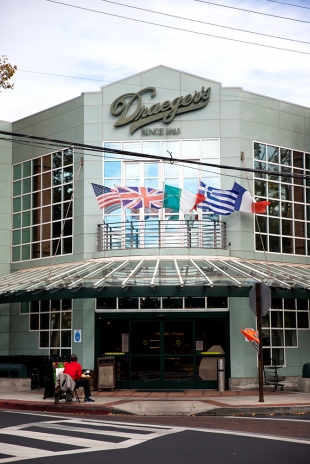 Draeger's Market, which sits at the corner of University Drive and Menlo Avenue in Menlo Park, will undergo an extensive remodel over the next two months. (Photo by Magali Gauthier/The Almanac.)

Nice! How about widening the sidewalk on the north side of the building so one push a shopping basket down it and not have to walk in the street.

The coffee bar is the sanest placeto get good service and a quiet cup of coffee. Hooray it stays!

There is an upstairs coffee shop? Who new? Maybe the 5 people I have ever seen up there...

Come on Draeger's. Do it right.

The Coffee Bar and tables used to be a really great restaurant for brunch. I understand that they do have great knick-knacks, pots and pans, and celebration cards, but wouldn't it be nice to convert it into a restaurant with an area for live music - like jazz? Also, why is there always a person begging for money in the front of the store?

Can you Pay to Reduce your Carbon Footprint?
By Sherry Listgarten | 8 comments | 2,337 views