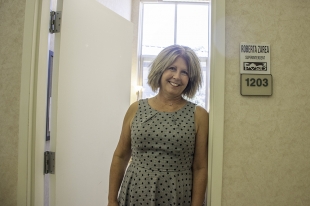 Roberta Zarea has been getting to know the Portola Valley School District since she became its superintendent on July 1. She doesn't have any new initiatives to implement at the onset of her tenure; rather, the bulk of her attention is currently on overseeing bond-funded district construction.

The Almanac sat down with Zarea, who most recently worked as an administrator in the Saratoga Unified School District, in July to discuss her interests and goals in the new position.

Zarea, 55, said that both the Portola Valley and the Saratoga districts have similar "cozy and charming" feels, and she enjoys "the many hats that administrators in small school districts get to wear." Both districts are relatively small: Saratoga enrolls around 1,900 students, while Portola Valley has about 574, according to each district.

Portola Valley "is obviously beautiful," she said. "I'm amazed at the beauty of the things happening in classrooms too."

Zarea served for six years as assistant superintendent of education services for the Saratoga district, a role she left in June to take her new post. Because she previously focused on education services, she said, curriculum is "near and dear" to her heart. Rolling out new social studies, history and science curriculums are projects of great interest to her, she said.

She said she's proud of Corte Madera School teachers' work with the Massachusetts Institute of Technology on a "cutting-edge" makerspace pilot project during the 2018-19 school year. The research project aimed to ensure that "makerspaces" in schools help students meet traditional classroom learning goals by aligning projects with curriculum standards.

Makerspaces are classrooms designed for hands-on creativity, where students use everything from 3D printers and toilet paper rolls to computer software and video cameras to put together projects. Teachers in other districts are now learning from Portola Valley teachers' work on the project, Zarea said.

Since beginning her new role, Zarea has spent much of her time overseeing projects funded by Measure Z -- a $49.5 million facilities bond that passed last November to pay for repairs, renovations and new buildings on the district's two campuses. This summer, the district started with smaller-scale projects that total about $700,000, according to a district staff presentation from May.

Replacement and repairs of a leaking roof at Ormondale School just began, and work is expected to be completed before students return to school on Aug. 21, Zarea said.

Workers finished updates to an annex at Corte Madera School to include two additional office spaces, she said. Gutter cleaning and dry rot repair at Corte Madera just began and should also be done before the fall semester starts, she said.

Workers concluded field renovations and landscaping, but the fields are closed to allow for seeds to become established and will remain closed until Aug. 30. The landscaping improvements at the front of Ormondale School are being irrigated and the new lawn area is taking root, Zarea said.

She is also exploring the possibility of asking voters to renew a $581 parcel tax, Measure O, which district staff says is necessary to avoid $1 million in budget cuts. The tax expires in June 2021 and generates about $1.2 million annually for the district.

The money goes toward advanced math, science and technology programs; reading and writing programs; art and music programs; reduced class sizes; and retaining teachers, according to the district website.

The district's communication with the public is also one of Zarea's priorities, she said. Stanford University's Graduate School of Business recently conducted a study about how the district can better communicate with the community to build support and trust. (The results haven't been released yet -- the district has received the report, but is "analyzing" and "digesting" it before presenting it to the school board in August or September, Zarea said.)

The study came about after the campaign to pass Measure Z "revealed that a significant portion of the community is skeptical of the district's ability to manage its assets and communicate with transparency," according to the business school website.

"Much of the skepticism is based on past fiscal issues as well as recent breakdowns in facilities," according to the website. "PVSD will need high community support to renew a parcel tax by 2021. Only 25% of the community's voters have children in a PVSD school, so the support must be broader than school parents. With a small district staff and no dedicated communications professional, the district has struggled to provide a consistent message to the community."

The report will help shape a new communications strategy, and the district is considering hiring a communications firm, Zarea said. Some initial changes that can be made include "refreshing" the district website to make it more accessible, she said, adding that she plans to send out frequent superintendent email updates.

Zarea replaced Eric Hartwig, who left the district in June after nearly four years in what was supposed to be a temporary position.

Before joining the Saratoga district, she served as a principal, vice principal, coordinator of special projects, and elementary school teacher in the Union School District.

Zarea, a San Jose resident, is originally from Michigan. She earned a bachelor's degree in Russian language and literature from the University of Michigan.

She also has a master's degree in elementary education from the University of North Carolina, Greensboro, and a master's in educational leadership from San Jose State University.

She is completing work toward a doctorate in educational leadership from San Jose State, where her research interests are technology in teaching and learning, achievement and motivation, assessment, organizational development and change, according to the school's website. She is writing her dissertation on elementary math education, she said.

Zarea's three-year contract includes a $215,000 annual salary, according to the district.

Measure "O" No.
You already bilked us out of 50 million.
Vote against measure "O"!!

A Pragmatic Approach to A Trillion Trees
By Sherry Listgarten | 4 comments | 4,074 views

Singapore's oldest cafe was about to open in Palo Alto. Then, the coronavirus hit.
By Elena Kadvany | 2 comments | 3,455 views

Repairing a Disagreement with your Beloved & “Physical” vs. “Social” Distancing
By Chandrama Anderson | 2 comments | 2,743 views

The University of California’s flexible policies during COVID-19
By John Raftrey and Lori McCormick | 6 comments | 2,674 views