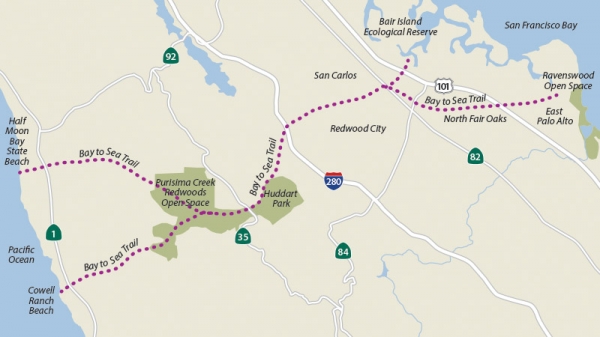 A map of the envisioned Bay to Sea Trail, running from Bair Island, and potentially the Ravenswood Open Space Preserve, into the hills near Huddart Park and Purisima Creek Open Space Preserve before heading into Half Moon Bay. (Map information courtesy ofPeninsula Open Space Trust.)

Land conservation agencies and local jurisdictions are teaming up behind a bold new plan to build a trail that would allow people to travel by foot, bicycle or horse from the San Francisco Bay to the Pacific Ocean.

The Bay to Sea Trail, while still in its conceptual design phase, would, as envisioned now, be a multiuse path that would run from Bair Island in Redwood City to Half Moon Bay, moving past Edgewood County Park, through Huddart County Park and the Phleger Estate, through Purisima Creek Redwoods Open Space Preserve, onto Burleigh H. Murray Ranch State Park and Johnston Ranch, into Wavecrest Open Space Reserve. Another trail segment on the conceptual map would run from Purisima Creek Redwoods Open Space Preserve along a path south past Lobitos Creek to Cowell Ranch State Beach.

On the Bay side, it could also include a trail segment that would run from the Ravenswood Open Space Preserve in East Palo Alto through Menlo Park and North Fair Oaks to Redwood City along the Dumbarton rail right-of-way.

It would build off of existing trails as well, such as the Bay Area Ridge Trail, the Bay Trail, and the California Coastal Trail, according to Rachael Faye, public access project manager with the Peninsula Open Space Trust (POST).

According to Faye, POST will be operating as the "backbone" of the initiative and act as project manager. That agency has been talking about the idea since as early as 2005, but it wasn't until recently that the organization made the vision a priority.

For the project to come together, though, it will take time – early documents point to a goal of project completion by 2037 – and the support of a number of different agencies, she explained. The agency is collecting letters of intent indicating support for the project from the following agencies: San Mateo County (including the parks and public works departments and the Office of Sustainability), the MidPeninsula Regional Open Space District (MROSD), the Golden Gate National Recreational Area, the Coastside Land Trust, the Coastal Conservancy, the California Parks Department, and the cities of Redwood City and Half Moon Bay.

"We all share this vision, and we want to contribute to it in the various ways we each can to make it become a reality," Faye said. "It takes a team."

Next, the agencies will assemble a planning coalition and initiate public outreach to work through questions like: What kind of experiences should the trail offer different user groups? Where will the route go? What existing trails should be melded into this path? What new trails will need to be designed and developed?

Faye said POST and other coalition agencies hope to see a path that runs along the Dumbarton rail corridor. The rail line now runs through East Palo Alto, the Belle Haven neighborhood of Menlo Park, and North Fair Oaks, areas that currently offer "very little safe active transportation (opportunity)," she said. If a multiuse path were supported there, she said, "It would make a really unique, high-quality recreational experience along that corridor."

The rail corridor is currently being studied by SamTrans and the Plenary Group, supported by Facebook, to determine whether it is feasible to rebuild and reactivate the old transbay rail line.

Faye said the planning coalition is waiting to see what the feasibility study finds, adding, "I hope we can be a voice in the conversation to support active transportation."

Because of the uncertainty of whether a multiuse path along the rail line will be technically feasible, the cities of Menlo Park and East Palo Alto were not asked to participate in the initial planning coalition, she said.

The more straightforward route to start with will be to work with the city of Redwood City to develop a route from Bair Island to Huddart Park, and then farther west through MROSD's Purisima Creek Redwood Open Space Preserve, she said.

The trail type and conditions would likely differ depending on the terrain being traversed, Faye explained. In the more urban areas, it might be as simple as a set of wayfinding signs or a separated bike lane, while in open space areas, it could include new multiuse trail segments.

Specific features of the trail, such as whether dogs would be permitted, or whether there would be overnight camping opportunities for people who wish to travel the whole route from point to point, are still to be determined, she said.

"It would be so great if we could create overnight opportunities along the way," she said. "It's something that's in the back of our minds."

While a minority of people might choose to hike or bike the whole extent of the trail, she explained, more would use it in smaller segments. Even so, it will provide an opportunity to connect communities, enable people to experience the different habitats that make up the Peninsula and connect the north-to-south trails that already exist or are in development.

Ultimately, it could enable one to travel by trail all the way from Redwood City to San Francisco and beyond, she added.

MROSD is already working on two trail projects that could be part of the final Bay to Sea Trail, district spokesperson Leigh Ann Gessner said.

The agency just recently acquired the last "puzzle piece" of the land needed to make that trail possible, Gessner said. The next step for that trail segment to become reality is to start the planning process for where the trail would go and begin public outreach, she added.

When MROSD put together a long-term plan in 2014, it was clear to the district that Peninsula residents have a strong desire for a network of trails to connect people to public open spaces, so this project aligns well with that vision, she said.

A connected trail network isn't just good for people, Gessner added. "It benefits wildlife, who also need to be able to move through the landscape safely to access food, water and habitats they need."

This is awesome! Make it happen!

Why would this take until 2037 to complete? By then, I may be too frail to attempt to bicycle this route. Hiking that distance is already out of the question at my age. Are more land purchases necessary or is it just bureaucracy?

This is a terrific new angle on the old theme for the Bay to Ridge trail which was to come across Arrastradero through Foothills Park. We are so lucky to have such good work happening on trails on the Peninsula.

Thank you everyone for keeping us all connected with green paths!

I'm all for hiking and biking trails ... but if the Dumbarton corridor can be reactivated as a rail line, that really should take priority.

Report Objectionable Content
Email Town Square Moderator
5 people like this
Posted by Sandi Farrell
a resident of another community
on Aug 22, 2019 at 11:37 am

This looks wonderful. As an elder, I won't get much use out of it, but what a legacy for our younger folks.

Report Objectionable Content
Email Town Square Moderator
2 people like this
Posted by Alan
a resident of Menlo Park: Belle Haven
on Aug 23, 2019 at 11:13 am

I'm good with most of the plan - but the Dumbarton corridor between Belle Haven and Sequoia Station really needs to be considered for some sort of commuter rail. The amount of construction - current and planned - mean that the current transportation information is severely strained - and traffic will only become worse. As I see it, use of the Dumbarton Corridor could be one of the few ways to relieve this. As someone bicycles regularly in Belle Haven, I can assure you that we have a reasonable set of trails (if I were to ask for something, it's a trail following the Bay's edge between Marsh Road/Bedwell Park and Seaport Blvd; I don't like biking Haven Ave, that's the real risk. The Ringwood Ave pedestrian/biking bridge is sufficiently close the corridor that it meets the need there). I can imagine some of the support of this proposal that some people living along that corridor don't want it reactivated as a rail line for noise reasons. I'm can understand it, and they should plan with that as a consideration, but they have to meet transportation needs.

"Because of the uncertainty of whether a multiuse path along the rail line will be technically feasible, the cities of Menlo Park and East Palo Alto were not asked to participate in the initial planning coalition, she said."

This bugs me. This sounds like "we're afraid you'll tell us what we don't want to hear, so we'll go ahead and make our plans and involve you when we have to". Initial planning sessions should face the hard issues immediately.

Reality Check is a registered user.


@Alan, the trail along the SamTrans-owned Dumbarton rail line would be in addition to a new transbay rail service linking east bay commuters and rail services (ACE, BART, Amtrak Capitol Corridor) with Caltrain in Redwood City. The right of way is easily wide enough (~100 feet) to safely fit a trail alongside two train tracks.

A Pragmatic Approach to A Trillion Trees
By Sherry Listgarten | 4 comments | 4,069 views

Singapore's oldest cafe was about to open in Palo Alto. Then, the coronavirus hit.
By Elena Kadvany | 1 comment | 3,380 views

Repairing a Disagreement with your Beloved & “Physical” vs. “Social” Distancing
By Chandrama Anderson | 2 comments | 2,741 views

The University of California’s flexible policies during COVID-19
By John Raftrey and Lori McCormick | 6 comments | 2,673 views