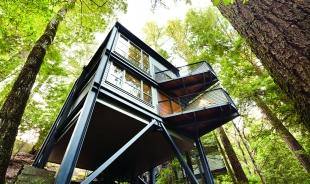 This is one of 24 elevated "tree houses" located at the Canyon Ranch on Skyline Boulevard. Courtesy of Canyon Ranch

17 people like this
Posted by Wellness Resorts
a resident of Atherton: Lindenwood
on Sep 9, 2019 at 9:52 am

Thses wellness resorts in the hills have the same formula: Pretty setting in the redwoods (an area that locals can get into 365 days a year for free), spartan rooms, various wellness classes and good food. They have to have the food or nobody will stay at all.

These are places for people who cannot just take a quit trip into the forest to unwind like local. They cater to out of towners or just wealthy people who need to spend a lot of money on something in order to still feel wealthy, but in reality, I'd rather be on my own in the redwoods than stuck wandering some uninteresting patch of resort grounds. that last part reminds me more of being on a golf course than being in the outdoors.

Previous post is so loaded with negativity, sweeping generalizations, unjustified assumptions and general grouchiness the author clearly needs some time at a wellness resort.

I checked out their website for myself. Interestingly, Wellness Resort's post is very similar to what Canyon Ranch describes on their own web page, but, yes, WR's opinion was said in an exceedingly negative tone.
Truth is, though, it's pretty close to being right, negative of not.

That's quite a hefty price tag to go and hang out in a tiny section of your own backyard. I think I would end up spending most of the time off site in the bigger parks in the area, so at that point and at that price, it's a hard sell for a local.

How is “ they cater to....wealthy people who need to spend a lot of money on something in order to still feel wealthy” pretty close to right? Sounds like mind reading mixed with envy to me. Or just depression.

@ The spending habits of wealthy people have been studied, and while nothing is universal, the statement about why some spend big has some validity, and while valid, yes, its a broad assumption
Here's a link.
Web Link

The text on the hotel's own website matches up to the other points he addressed: discussing the walks on short trails on the grounds, food, classes, and suggestion to leave in order to see the more natural, less "manicured by humans" areas validates his other comments, whether or not they are shared by you, they are shared by the Canyon Ranch.

Finally, while you may have some differing opinions, the original poster never made a direct and personal insult as you did. Let's keep things more civil and not shoot the messenger.
A walk in the real, unspoiled redwoods is the remedy for the frustration you might be feeling, and as a local, it's available any time you want it at no charge.

If I had the money I'd give it a try. I have friends who have stayed at the Canyon Ranch in Tucson, Arizona and said it was fantastic. Unlike me, they are very wealthy.

What's wrong with spending money on a day of pampering in the redwoods? People around here have high stress jobs with lots of money. Why not spend it taking care of themselves? I would if I could afford it.

Sure everyone can drive up to skyline for a stroll in the redwoods or to Half Moon Bay for a stroll on the beach. We are lucky to live in an area with so many outstanding scenic options within an hour's drive. Although walking through the redwoods is very nice (and free), it's also pretty wonderful to be pampered and fed for a day or two (or more), if you can afford it, which many around here can. What's wrong with that?

For me personally, it's too close to home, too familiar. We're fortunate enough to be able to go to many wondrous places all within a short drive for weekend pamperings and such, and it's fun to visit as many as we can.

For me, heading up there and sort of being stuck on a small patch, knowing what I know of the area, and I don't mean to be rude, but I'm afraid it would just feel more uncomfortable than relaxing.
The idea of it just seems so strange. Never say never though I guess.

If I were from out of town, I'm sure it would be different.
I could absolutely see going up for lunch to check the place out one day though!

I went to the original spa at SkyLonda - one of the first iterations of the property so so long ago. I loved it. I stayed in the only structure they had at the time. It was rustic and reminded me of a lake house I used to go to up north as a kid. We hiked in the redwoods and it was fabulous. One night as a getaway with a friend from little kids, job and hubby. I lived in SF proper at the time.

I am sure the resort will do very well. Canyon Ranch has it's brand down. It's a perfect retreat for out of towners who have business in SF or Silicon Valley. Great corporate option too. I don't think they expect many locals. The idea is for a 4 to 5 night stay like at Rancho La Puerta in Mexico (which is voted the #1 destination spa year after year and is much less $$$). But I know people who won't go to Rancho because of border issues so this is a good alternative if you have the dough.

I think this is great for the area and provides local jobs and reinvigorates a property that needed a lot of help.

Anne Le Ziblatt, formerly of Tamarine and Bong Su, is back with a Vietnamese noodle bar in Redwood City
By Elena Kadvany | 7 comments | 3,539 views