Coalition of cities call on Stanford to 'pay its fair share' to address the impacts of proposed campus growth on housing, traffic 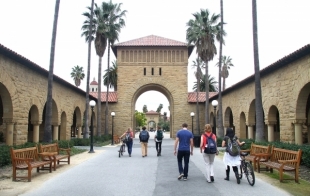 Stanford University's proposed campus expansion will be the subject of a public hearing in Palo Alto on Oct. 22. Weekly file photo.

Stanford is no longer a non-profit, it is an amazingly large corporation combined with the robber baron ethos of it's founder.
This years budget is $6.5 billion. It has a $28 billion endowment
it rides $1.1 billion in "donations" last year. It paid out $1.3 billion from endowment earnings last year.
Stanford pays property tax on land used for commercial enterprises but dies not pay property tax on its property used for faculty and staff housing.


The housing needs of Stanford's development should be met by the private sector, NOT government. Government needs to get out of the way! This private sector housing would then pay the property taxes and impact fees necessary to mitigate the impact.
As far as faculty housing goes, the San Mateo County Community College District has tax exempt housing at Canada College. Solve that problem and then you can make a case against Stanford's exemption. None of that housing should be tax exemp!

Having said that, housing on the Stanford Campus, should be exempt from property taxes for services which the University provides.

This is similar to the on-going FaceBook/Menlo Park dispute in which MP expects Facebook to build housing for EVERY new employee they hire in MP. Ridiculous. It is NOT the job of a company to build housing for their employees. It's the job of local government to create an environment that either allows for the building of new housing and the expansion of business to take advantage of the housing, or shut down new housing and also shut down new businesses from moving in. Our local governments are completely misdirected (and incompetent) in believing they can sit back and hold local companies (or Stanford) hostage in this regard. Jack (above) is correct. Get government out of the way. Let's get the tax-paying private sector involved in the things they do best.

I think Stanford has enough money and land to build adequate housing for it's students and faculty.

@MPer: Yes, and I think they ought to build a large development west of Junipero Serra on all that open land near the Dish. Great views, convenient to Page Mill and 280, and a short bike ride to campus. Great idea. Use up some of that open land they've been sitting on for years.....

The fact that Stanford does not pay property tax for education related purposes, which includes housing, is the fundamental problem. Our community services (fire, police, roads, schools) are built on tax revenue if Stanford with their massive endowment is not contributing then that is not equitable. They are essentially leeching off the community.

Report Objectionable Content
Email Town Square Moderator
12 people like this
Posted by Nearby Resident
a resident of Menlo-Atherton High School
on Oct 23, 2019 at 10:35 am

Wow, some of you are not paying attention.

While philosophically I agree with the notion that businesses (like Facebook, HP, Google and including Stanford, which is unquestionably a big business) should not need or be mandated to be in the business of housing, PROVIDED they are not asking for special considerations.

HOWEVER, it's STANFORD that's opening the door to changing terms and asking for special considerations, and it is entirely appropriate for local governments to put topics of interest related to that 'change in terms' on the table. It would be a dereliction of duty to the taxpayers to not due so.

2: It's very clear that Stanford is stiff-arming northern communities simply because they believe the can, and they can because they don't have a seat at the table. I hope northern communities take this as an opportunity to review their own future growth needs and take any land necessary to achieve those needs from Stanford via eminent domain, which they are entirely empowered to do.

I think seizing Stanford Hills, bulldozing those homes and putting a community center and park there would be quite nice! And totally legal and appropriate.

3: "The fact that Stanford does not pay property tax for education related purposes, which includes housing, is the fundamental problem."

YES. In my opinion every non-profit, every church and every school should pay property taxes; they'd be able to deduct the taxes as an expense, but the pass-through of those dollars would solve this problem virtually instantly.

@nearby resident : It seems that one of the things that Stanford wants is to lock in the terms of the agreement which it has to do development. So that the local communities don't continue to add new requirements on top of all the requirements they already impose. Not an unreasonable request from Stanford, it seems. In the meantime, if Stanford and local communities don't agree on some kind of deal, the local schools will continue to get more students from Stanford without any compensation. So, the local communities holding tight with their agreement will likely not work out as well as they would like, as they get ZERO from Stanford instead of the $130M they had been talking about. It will be interesting to see who blinks fiorst, and to what extent!