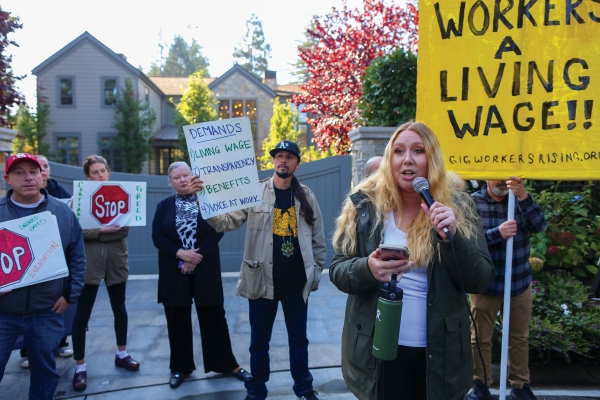 Vanessa Bain, right, of Menlo Park joins Uber drivers and gig economy workers protesting outside the home of Uber investor Bill Gurley in Atherton for better working conditions and compensation. Today (Nov. 6), early Uber investors are free to cash out for the first time since the company went public on the stock market in May. (Photo by Sammy Dallal/The Almanac) 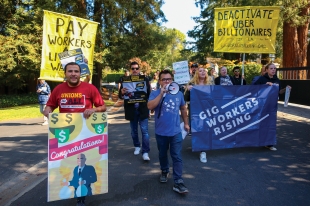 Uber drivers and other gig economy workers protest on Nov. 6 outside the Atherton home of Uber investor Bill Gurley for better working conditions and compensation. (Photo by Sammy Dallal/The Almanac)

If the drivers are so exploited, they are welcome to work some other job. Oh wait, the Uber job must be the best one that they can find, so if Uber didn't exist they would be worse off. They are protesting one of the people that helped make their lives better by offering them a better job than they could otherwise get. Nice.

Jeff must be a cab driver.
I believe Uber drivers should be paid fairly...
meaning distribute profits fairly to those who make the service possible.

1 person likes this
Posted by editoratlarge
a resident of another community
on Nov 7, 2019 at 2:55 pm

editoratlarge is a registered user.


So it’s OK for companies to exploit workers because they can “just go somewhere else. Got it. Thank you, wealthy Atherton homeowner.

Report Objectionable Content
Email Town Square Moderator
5 people like this
Posted by I have questions
a resident of Menlo Park: other
on Nov 7, 2019 at 3:02 pm

I don't get it: Gig workers choose this line of work because it's flexible. They pick the hours and amount of hours they work. The gig worker platforms provide this flexibility and now are being asked to call the workers employees and give them benefits? The knowledge work economy has lots of contractors who don't get the same flexibility and benefits. Over 50% of Google's workforce is contract/temporary workers and most of those work full time hours with the working hours, amount of hours, and work required dictated by Google. I bet most of those contractors would like to be employees too.

If gig workers become employees, will they be required to work a specific number of hours per day or provide a specific level of service (for example, Uber/Lyft drivers would work late night/early morning shifts to/from airports, or make themselves available in underserved areas)? To be an employee means being beholden to what the employer business dictates. I understand the workers want more money and benefits but do they understand the tradeoffs between their flexibility and becoming an employee? There are not a lot of jobs out there that offer total flexibility AND compensation too.

And we as a community: Are we willing to pay more for the services provided by the gig workers and platforms? Because prices are certain to go up if the workers become employees. I would like to learn what projections are for increase/decrease in platform worker population, service levels, prices, demand and adoption. What is the impact to these offerings if gig workers become employees? And what will be required of these employees in order to be considered employees? These topics are not addressed in the media coverage.

Uber is just champing at the bit to replace drivers with robots. Meanwhile the people who can't find any better work than driving for Uber (or Lyft) are getting exploited because the company considers them only a temporary expedient. Uber is fighting a new California law which classifies its drivers as employees because the company continues to lose money and doesn't want the added expenses of employer taxes and employee benefits. The stock has tanked since its IPO partly because it is not clear whether the company will ever become profitable. The drivers are getting treated like dirt and have every right to try to get a better deal before they are all laid off.

“If you don’t like your job, just go somewhere else.” Spoken like someone truly living in an entitled bubble and doesn’t even know it. How out of touch with the rest of humanity are you? Some people don’t have much choice.

It’s called progress. Throughout history, people have fought for rights we now consider basic human rights. And guess who has always been opposed to these changes? That’s right- wealthy, established folks. Anytime “the poors,” the plebeian class want better treatment, the wealthy just tell them to just eat cake. Just be grateful for the $10/hr job you have, while I sit comfortably in my multimillion dollar home.

Why don’t you go tell that to workers who fought for fair labor last century, the same labor laws that YOU currently enjoy. Hey if you don’t like working 15 hours a day in an unsafe factory, with no bathroom breaks, no sick hours, why don’t you just somewhere better? You’re protesting people paying you and making your life better than it otherwise could be.

You want to tell that to migrant workers who work backbreaking hours in the sun and get paid pennies to pick the produce YOU eat in your nice multimillion Atherton home? “Hey if you don’t like the working conditions here, why don’t you just go back to your war-torn country where you literally have to fear for your life everyday?” So you can sit in your nice Atherton home and enjoy the luxuries of life, but if other people want better conditions for their own life, you’re telling they ought to shut up and be grateful? Really think about how much of your generational wealth was built off the labor of poorer people.

Seriously, take the silver spoon out of your mouth, get off your entitled and privileged throne and try to understand how it feels to be someone without the wealth and opportunities that you have. What if Uber is the best option they have to provide for their family? Maybe it pays okay but provides the flexibility for them to pick up their kids. Not everyone has an nice, cushy office job that lets them leave in the middle of the day to get their kid without the risk of being fired. But just because it’s the best option they have, that means they can’t want better treatment? Is that how you operate at your job and in your life? Don’t seek improvement, just go somewhere different if you don’t like where you are.

Comparing gig workers and google contractors may be one of the most superficial, tone-deaf comments I've seen in a while.


Report Objectionable Content
Email Town Square Moderator
6 people like this
Posted by Jeff
a resident of Atherton: West of Alameda
on Nov 8, 2019 at 5:16 pm

One person can say that Uber drivers "deserve" more while another person can say that they "deserve" less. Who gets to decide? The most stridently compassionate will say to use force to get their way. The only rational answer is let supply and demand work it out, otherwise it's a nonsensical battle of opinions.

Report Objectionable Content
Email Town Square Moderator
9 people like this
Posted by Sophie888
a resident of another community
on Nov 8, 2019 at 6:23 pm

This protest is too personal. Why did they pick on this specific investor and protest in front of his home? There are UBER founder, Executives, Board Members, share holders, employees, and UBER headquarter in the city. Why?

Report Objectionable Content
Email Town Square Moderator
4 people like this
Posted by Hahaha
a resident of Menlo Park: Downtown
on Nov 10, 2019 at 8:28 pm

Gurley got probably a good chuckle out of this.
The people who do away with social education and social responsibility of workers (slave laborers), can take a little protesting from the poor fellows they tricked into believing in 'chance' and 'opportunity' without social organization and justice.
Harmless and ineffective, and easily controlled and dispersed by the Atherton PD (funded by the taxes of these poor smocks protesting).