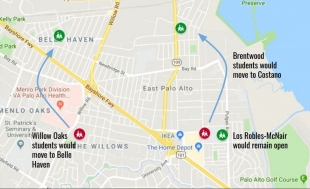 View the interactive map at tinyurl.com/RavenswoodClosures2019. Under the proposal from Gina Sudaria, interim superintendent of the Ravenswood City School District, and her leadership team, Willow Oaks Elementary School and Brentwood Academy would close in order to save the district money. Map built using Google Maps.

The Ravenswood City School District has announced which of its five elementary schools have been proposed for closure next fall: Brentwood Academy in East Palo Alto and Willow Oaks Elementary School in Menlo Park.

On Wednesday, Sudaria notified the Board of Education, teachers and staff, and parents received a pre-recorded phone message from her in English and Spanish. The proposals are not final and are subject to approval by the school board.

Ravenswood began discussing school closures in earnest this summer, under new leadership and with a looming budget deficit. The K-8 district is aiming to cut $1.35 million from next year's budget. Closing a single school would save Ravenswood about $400,000.

Sudaria has said that merging schools is necessary for the survival of the district, where enrollment and corresponding state funding have been steadily declining for years. All of Ravenswood's elementary schools are operating at close to half capacity this year, and the district's overall enrollment is just over 2,000 students.

Brentwood, the largest of the five elementary schools this year, with 330 students, also needs the most renovations, according to a presentation Sudaria will give to the school board at a special meeting on Friday.

In an interview Wednesday evening, Sudaria said that she and her leadership team took into consideration four priorities identified by community members and board members through an input-gathering process in recent weeks: location of schools, including keeping neighborhood schools and ensuring the three remaining schools are spread out so more students have a school nearby; minimizing the number of students impacted; considering the facility's size and condition; and protecting special programs such as dual-immersion, arts and mental health support.

They considered 12 merger scenarios, Sudaria said, and weighed each against additional factors, such as whether each school has enough students to be sustainable in the long term, the school’s performance and whether closing a school would disproportionately affect any specific ethnic subgroup.

"I pride ourselves on having a team of diverse perspectives and points of view that pushed and challenged each other," Sudaria said. "There's not going to be 100% agreement, but at least there will be consensus and understanding of how we came to the proposal to the point where I’m confident that we've been able to weigh all the tradeoffs. I'm able to stand behind this proposal."

Under the recommendation, the district's dual-immersion program remains at Los Robles-Ronald McNair Academy (which is also the district's most recently renovated elementary school) and Turnaround Arts will stay at Costaño School. All three of the remaining elementary schools will keep their existing makerspaces, music and art offerings and school-based mental health services.

Other advantages to this consolidation plan are that Ravenswood can keep a school in Menlo Park, avoid further disruption for Los Robles students (who recently moved to McNair), minimize the use of portable buildings and ensure there are enough classrooms for all projected students, with room to grow in the future, according to the board presentation.

Middle schoolers will be unaffected by the mergers.

Any students who are new to the district next fall will be able to choose which elementary school to attend.

Staff at the affected schools will generally move with students, though principals, office staff and potentially custodians will be cut, according to the proposal. Classified staff who would be affected would be notified in February.

Ravenswood doesn't plan to layoff any teachers, Sudaria wrote in her presentation; any cuts will be covered by natural attrition.

The district plans to explore leasing out the Brentwood and Willow Oaks campuses to bring in additional revenue, Sudaria said, and to address a likely expansion request from Kipp charter school in East Palo Alto.

"In order for this district to continue to thrive and renew itself we have to be optimistic in the possibilities," Sudaria said. "On the other side of this is going to be stronger school communities and programs for students."

Sudaria is encouraging community members to share their feedback on the merger plan at several upcoming public meetings.

On Thursday, Dec. 5, Ravenswood's District Advisory Council (DAC) and District English Learner Advisory Council (DELAC) will hear the proposal from Sudaria. Child care, food and translation will be provided. The meeting will be at 6 p.m. at the district office, 2120 Euclid Ave., East Palo Alto.

The school board will discuss the mergers at its regular meeting next Thursday, Dec. 12, at the district office.

The board is set to make a final decision on which schools to close on Jan. 9.

There will also be informational meetings at each elementary school on the following dates:

Information about the mergers and an opportunity to provide input online are available at ravenswoodschools.net/school-mergers.

I find that the leadership still does not get it. Why close the only school West of 101 (Willow Oaks) where I would have to assume a large group of students/families live. There is no safe route to walk or bike to the other campuses which causes more congestion. Yes, there be busses, but that doesn’t always work for students who have different schedules.

How strange that the OConnor Street petition brought the proximity to schools as a valid argument on why they wanted to attend MPSD and now the only school in RSD in the Willows is closing down and the next nearest one is closing as well which strengthens the rationale of this group as people want to go school in their neighborhoods and not be biased for 45 minutes to schools across the freeway.

Repairing a Disagreement with your Beloved & “Physical” vs. “Social” Distancing
By Chandrama Anderson | 1 comment | 2,389 views