Locals invited to have a look at engine prototype this afternoon 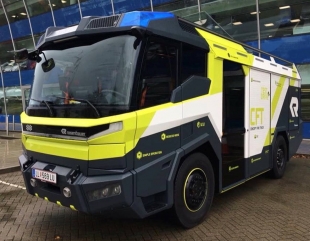 The Menlo Park Fire Protection District is looking into its future by checking out a new, all-electric fire engine that promises to cure a lot of ills that plague conventional diesel-powered fire trucks.

An actual purchase of an all-electric truck might be a couple of years away, though, he acknowledged. "This is a concept truck; it's not in production at this time," he said.

The fire is district is holding an open house featuring a Rosenbauer prototype engine on Thursday, Dec. 12, from 1 to 5 p.m. at Fire Station 6, 700 Oak Grove Ave. in Menlo Park.

Range limits that make electric cars impractical for some drivers aren't a major deterrent to using electric firetrucks in urban fire districts such as Menlo Park because more than 90% of all responses by firefighters, such as medical incidents, last only a short time, Schapelhouman added.

As a backup, the all-electric engine has an extra battery system and a small booster motor for local fire calls and other incidents involving longer response times, he said.

The major drawback of the all-electric truck is that it would have limited use in the case of providing aid in out-of-town emergencies, such as wildfires, since the batteries need to be recharged at the fire station, according to Schapelhouman.

"We'd be using (one) locally for short-distance responses," he said.

Eliminating diesel fumes has a clear benefit to firefighters, since the fumes are a known carcinogen, Schapelhouman said, adding, "We're trying to be a lot more careful about (diesel) exposures and what we could do to improve working conditions in acquiring new equipment."

The district is in its third and final year of replacing its entire fleet of eight diesel fire engines, which are used in "front-line" service for about 10 years, he said.

The agency keeps eight engines in front-line service at a time and four or five in reserve for use in emergencies, he said.

Rosenbauer is headquartered in Austria and has factories in South Dakota, Minnesota and Nebraska, according to the company's website.

No mention of the biggest drawback is that it costs $6 million! See the article in Electrek.


"No mention of the biggest drawback is that it costs $6 million!"

Wrong - The Rosenbauer Concept Fire Truck is being offered to MPFPD for $1.2 million.

Its lifetime Total Operating Cost TOC will be about 40% less than that of a comparable diesel powered vehicle.

Under normal situations, this truck sounds great. But in the aftermath of The Big One, when the earthquake has knocked out power lines, power plants and power distribution facilities, a diesel-powered truck can keep running for months, using diesel that is stored at the fire stations. An all-electric truck will only work for one or two days after The Big One, since there is currently no practical way to store enough electricity to run a power-hungry fire truck for a longer period of time.

Report Objectionable Content
Email Town Square Moderator
3 people like this
Posted by Menlo Voter.
a resident of Menlo Park: other
on Dec 14, 2019 at 5:37 pm


"a diesel-powered truck can keep running for months, using diesel that is stored at the fire stations"

And an electric truck can be recharged for months using a diesel powered generator using diesel fuel that is stored at the fire stations. Next.

Singapore's oldest cafe was about to open in Palo Alto. Then, the coronavirus hit.
By Elena Kadvany | 2 comments | 5,047 views

A Pragmatic Approach to A Trillion Trees
By Sherry Listgarten | 4 comments | 4,153 views

Repairing a Disagreement with your Beloved & “Physical” vs. “Social” Distancing
By Chandrama Anderson | 2 comments | 2,831 views

The University of California’s flexible policies during COVID-19
By John Raftrey and Lori McCormick | 6 comments | 2,718 views