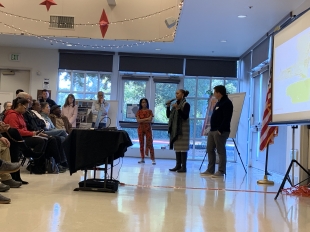 Menlo Park Mayor Cecilia Taylor speaks with attendees at a community meeting in Belle Haven to talk about Facebook's proposed new community center, assuring them that she will not let the community's history be forgotten. Photo by Kate Bradshaw/The Almanac.