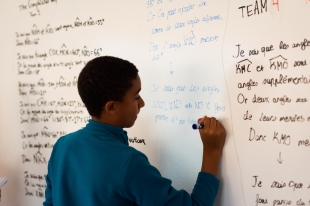 Oh god another school for pampered children. Why not learn Spanish so you can speak with your neighbors? Oh wait of course you don’t live near Spanish speakers.

What a colossal waste of money! I sure hope my taxpayer dollars aren't paying for these schools! The only language you need to be proficient in in order to get a job in Silicon Valley, or this country, is English!

3 people like this
Posted by Nativist Nonsense
a resident of another community
on Feb 11, 2020 at 2:08 pm

Seriously, "pearl"? The ONLY language that anyone needs to know in Silicon Valley is English?

If you actually believe that, that only shows how little you about the global market (and Silicon Valley is a major part of that market).

It's great to see these schools combining forces. When I was in high school in the mid-west, we had the choice of French, Spanish, German, Latin, Mandarin, or Japanese. I was expecting more from Silicon Valley schools when I came out here, so it's great to see language being at the center of at least one school. And for the haters posting, I would suggest trying to learn a language. It will help expand your horizon beyond shouting at clouds or trolling a newspaper comment section.