With its centennial drawing near, Pacific Art League looks forward 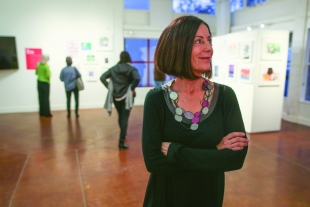 Pacific Art League Executive Director Lisa Coscino attends the opening of "Creating Change Through Art" in Palo Alto on Feb. 7. The exhibition features the artwork of youth and young adults who participate in community outreach programs. Photo by Sammy Dallal.