In new Redwood City artwork, the community is the tree | News | Almanac Online |

In new Redwood City artwork, the community is the tree 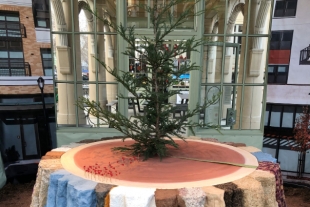 "You are the Tree" is a community-focused installation in downtown Redwood City's Art Kiosk, on display through March 8. Photo courtesy of Kent Manske/Nanette Wylde/Fung Collaboratives.

Palo Alto is not the only Peninsula city named after a tree, nor is it the only one with arboreal art on display this month. "You are the Tree," a new installation in the Art Kiosk space on downtown Redwood City's Courthouse Square, considers how the flourishing city, for better and worse, was built on demand for lumber from the coast redwood trees growing nearby.

Spearheaded by artists Kent Manske and Nanette Wylde, "You are the Tree" includes a 7-foot-diameter replica of an old-growth coast redwood stump, with a living redwood sapling at its center (donated by Wegman's Nursery, eventually to be planted in Red Morton Park). The top of the stump bears flags indicating events of historical importance over the past 400 years (the lifespan of a tree of that size).

"The project juxtaposes the historical facts of the 19th-century clear cutting of old growth redwoods from the Santa Cruz Mountains with the resultant development of Redwood City, both historically and currently, with emphasis on the contrast of disruptive innovations and resurgent interests in slow/by hand/craft industries," according to Manske and Wylde's artist statement.

The work's title is not merely symbolic: This tree truly is made up of pieces of the community. The colorful, textured "bark" of the stump was made by contributions from 25 local organizations, business and laborers, including costume fabric and prop scraps from Dragon Productions Theatre Company, beeswax from the Redwood City Public Library's rooftop hives, water from Redwood Creek, beer grains from local breweries, coffee grounds from the city's cafes, kitchen scraps from restaurants, plants from nurseries, hair from salons and numerous other industry byproducts (an extensive downloadable guide as well as detailed process photos are available at "You are the Tree"). The collected bits and pieces were painstakingly turned into pulp, then applied to a paper mache and hardware cloth frame. By proudly displaying this patchwork quilt-like mix of source material, "You are the Tree" means to celebrate the community's cultural diversity and labor force, Manske said.

The installation, on view through March 8, also aims to inspire viewers to think critically about what resources are worth sacrificing for others and to consider the environmental cost of human expansion and development.

"The green triangle on the stump's surface represents the remaining 5% of coast redwood trees. Ninety-five percent have been harvested," Manske pointed out to the Weekly.

"You are the Tree" asks the community to consider its role in maintaining a sustainable ecosystem, and how the damage from our byproducts might be creatively mitigated. In this city, as in others built on exploitation of natural resources, the human community is inseparable from the landscape it was named after. You -- we -- are the tree, and we all bear responsibility for its fate.

Singapore's oldest cafe was about to open in Palo Alto. Then, the coronavirus hit.
By Elena Kadvany | 1 comment | 4,592 views

A Pragmatic Approach to A Trillion Trees
By Sherry Listgarten | 4 comments | 4,128 views

Repairing a Disagreement with your Beloved & “Physical” vs. “Social” Distancing
By Chandrama Anderson | 2 comments | 2,796 views

The University of California’s flexible policies during COVID-19
By John Raftrey and Lori McCormick | 6 comments | 2,702 views