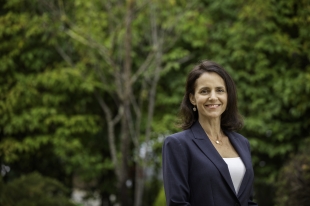 Francesca Segrè, a Menlo Park City School District parent, who previously worked as a journalist and as a staffer for former state assemblyman Rich Gordon, has put her hat in the ring for the district's November school board race.

She is seeking to fill one of the two openings on the school board this fall. Board member David Ackerman is not running for reelection when his term finishes at the end of the year, he told The Almanac in a Feb. 26 email. Trustee Mark Box noted when he was appointed to his position last September that he would not run for election in November.

Segrè, who works in communications at LinkedIn and serves on the site councils at Encinal Elementary School and Hillview Middle School, announced her candidacy in a Wednesday email to The Almanac. She is the only person who has declared she is running so far.

Segrè said her 20 years of experience as a journalist – for news organizations such as The New York Times, Thomson Reuters and KQED – made her an "expert listener" and a "very good communicator, who brings a sensitive ear to what people are concerned about."

"I currently live in the house my grandparents bought when they fled WWII Europe; they didn’t have a lick of English," said Segrè, whose two children attend district schools. "They did have this incredibly strong education background and fierce grit. I want to serve on this board so every child (in the district) has the education and life skills to create the life of their dreams for now and in the future."

On Segrè’s campaign website she lists what her main priorities as school board member would be. The first is sustainable long-term public and/or private partnerships and mechanisms to help fund the district.

She lists academic excellence through maintaining low class sizes, the district's parent education series, and prioritizing early childhood education programs as her second goal. Her third priority is school safety, which includes maintaining the district's emphasis on teaching students social and emotional skills to support themselves and each other, and ensuring students have safe routes to school campuses.

In a phone call with The Almanac, she noted that in the near term the Measure X parcel tax, which passed in 2017 with an initial annual rate of $360 per parcel, will need to be renewed or replaced to keep the district financially solvent and maintain the district’s educational quality and standards.

The board last year had preliminary discussions about putting a measure before voters to renew or replace Measure X at a higher taxation rate, in part, to help address deficit spending that could result from last year's teacher salary hike and rising pension costs.

Segrè said that in the future, she'd like to see more innovative and long-term public and/or private partnerships and mechanisms to help fund the district. She'd like to see "more steady" funding so the district doesn't have to seek parcel tax funding as regularly.

In September, Segrè interviewed for a seat left vacant by Caroline Lucas, who resigned in August. Board members chose former trustee Box to fill the role, but Segrè said she would run for school board the next year.

Singapore's oldest cafe was about to open in Palo Alto. Then, the coronavirus hit.
By Elena Kadvany | 1 comment | 4,396 views