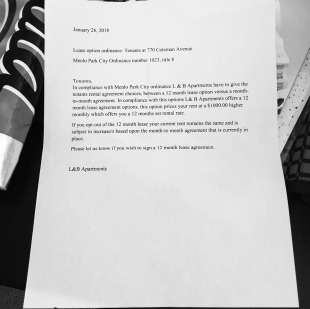 Renters at the L&B Apartments complex at 770 Coleman Ave. were told they could get a one-year lease – if they agree to pay an extra $1,000 a month. (A son of one of the property owners has since retracted that condition for a 12-month lease.)

I've been renting apartments for 30 years. Instead of having tenants sign a new lease every year, which is a lot of work for the tenants, landlords and property management companies, why not pass a law that landlords cannot raise the rent more than once a year.

What I don't like about signing a lease EVERY year in the same apartment building is that I'm locked in if I want or need to move. No thanks. If renters knew they wouldn't have to worry about random rent increases throughout the year, there would be no need to sign a lease.

What apartment renters really need is rent control. There is no rent control in Menlo Park and it really hurts those of us without huge incomes - those of us who work hard and provide much needed services but can no longer afford to live here. Actually, it also hurts people who make 100K/year. Rent is about 30K/year for a crappy one bedroom apartment. That's a lot of dough!

One way to reduce rent price is to increase supply.

With the high rental price, there are house owners keeping their house from rental market because they do not want the headache and dangers of renting out a house.

There are a lot of laws to protect a renter but very few for the landlord.

I propose the city setup a minimum rental price, if someone rent out his/her space, he/she has a super power to evict a tenant.

With this rule, I think it will increase a lot of rental market. It also has the incentive to be a nice tenant.

I have a friend, he rented out his house when he was not rich. He is getting rich and he doesn't need the money but still leasing the house because the tenant is good and few bucks is a few bucks. He doesn't increase the rent and the tenant bakes him a cake once a while.

This example shows that lot of people want to lease their house if he knows the tenant is good.

The minimum rent can be 70% or lower than the market value.

I wonder is any one looks at how many idling house in San Francisco.


Report Objectionable Content
Email Town Square Moderator
3 people like this
Posted by In what planet?
a resident of Menlo Park: Downtown
on Apr 16, 2018 at 1:51 pm

Mp has few renter protections. I have had friends evicted for no legitimate reason. Other friends have their rent raised large amounts several times per year. Market rate increases are far above the typical 3-5% raise that a person or couple earns every year, so they are very hard to absorb. Moving is costly, and finding a reasonably priced rental within commuting distance of jobs is really hard. All the newly built housing is luxury, not middle class, and rents have not dropped on the older housing stock either.

Landlords can evict anyone for any reason. As long as it's not blatant discrimination, the renter has no recourse. And even when the landlord does something illegal, the renter has to have the money to hire lawyers to fight it. Lose-lose proposition.

I would support caps on annual rent increases, and reasonable restrictions on evictions.

Can you Pay to Reduce your Carbon Footprint?
By Sherry Listgarten | 8 comments | 2,346 views

You Can Help: Scents and Migraines
By Chandrama Anderson | 0 comments | 2,020 views