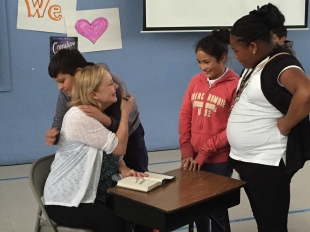 In the age of e-books and Amazon, how can a community bookstore thrive?

The community of Menlo Park staved off this question in 2005, when it rallied to save Kepler's Books by forming a board of investors or "patron circle;" and again in 2012, when owner Clark Kepler announced his retirement and a team of dedicated locals rallied to develop a plan for a sustainable bookstore business model.

Now, after years of effort, Kepler's Books announced it has taken the final step of that plan and launched the Kepler's Literary Foundation, a fully-operational, tax-exempt nonprofit connected in vision with, though separate in purpose from, the brick-and-mortar bookseller located at 1010 El Camino Real in Menlo Park.

Jean Forstner, who previously ran programming and operations at Kepler's events, will be executive director. She graduated from Stanford and worked as California state director for U.S. Senator Alan Cranston before working for Kepler's.

Chairing the board of the nonprofit will be Patrick Corman, a marketing and communications consultant. Also on the board will be Vice Chair Dan Gilbert, a technology entrepreneur and investor; Secretary and Treasurer Beth Morgan, entrepreneur and chief operating officer of Twine; Praveen Madan, a business executive and social entrepreneur; and Anne Dimock, a creative writer and nonprofit executive.

The nonprofit will have an annual budget of about $500,000 and a staff of about five people, according to Ms. Forstner. About 20 percent of the budget comes from ticket revenues to premier events discussions featuring intellectual and literary headliners such as Bill Nye, Roxane Gay and Khaled Hosseini, to name several from recent months. The rest of the revenue comes from tax-exempt individual and community donations and some small grants, she said.

The organization sees itself as "the premier producer of literary and cultural programs in Silicon Valley," according to a press statement.

The nonprofit hosts a quarterly literary seminar series with Kimberly Ford, a former adjunct professor at U.C. Berkeley; a number of reading and discussion groups that are free and open to the public; the weekly recording of radio show "In Deep" with Angie Coiro; and an event series called "Story is the Thing" for up-and-coming local writers to talk about writing and storytelling.

The foundation also runs a program started two years ago to bring children's book authors to meet with and do readings for students in the Ravenswood City School District, where many lower-income families reside. So far, 6,500 students have participated in the program and 1,300 books have been donated to the district, the foundation says.

"We are bringing the best of the best in youth authors into those schools," Ms. Forstner said.

Katherine Applegate, a Newbery Award-winning writer, did a reading event at Brentwood Elementary in East Palo Alto in March 2016. Of the program, she wrote: "There are events that celebrate the written word, and then there are events that change lives. Kepler's Literary Foundation is a life-changer. ... This is a program that helps students fall in love with literature. This is a program that turns reluctant readers into joyful ones. And most importantly, this is a program that reaches children who otherwise might not be reached. … I'm already begging to return next year."

After the first year of the program, the feedback was so overwhelmingly positive that the scope of the program doubled the next year, Ms. Forstner said. Now, the goal is to have each child in the school district get to meet two children's authors each year.

Splitting the bookstore's mission into for-profit and nonprofit entities has been years in the works. Prior to the full spin-out of the literary foundation, the event-organizing side of the bookstore's business model was called Peninsula Arts and Letters.

According to Kepler's community engagement officer and board member Praveen Madan, in 2012, when the Kepler's 2020 plan was developed over a six-month period, there were "dark clouds on the horizon for bookstores." Borders had declared bankruptcy in 2011 and e-book sales were taking off.

To answer the question – what's the future of Kepler's? – a series of workshops, exercises and surveys were conducted, followed by a two-and-a-half-day planning session.

The solution was developed by an eight-person team, Mr. Madan said. Bookstore staff would bifurcate the business so that there would be a retail bookstore with a social purpose, and a separate nonprofit that would focus on organizing literary and cultural programs.

According to Ms. Forstner, having a separate organization focused on event programs means that employees aren't being pressured to sell books and plan events at the same time.

"It also lets us involve the community," she said. The program at the Ravenswood City School District is one clear example, she noted. "We can seek grant funding and do programs of benefit to the entire community – things that would be difficult to do as a for-profit."

The shift has also helped the bookstore, Mr. Madan said. Though the bookstore maintains a social purpose, splitting the responsibilities has helped bookstore staff focus on improving the store's inventory. Between a quarter and a third of the bookstore's staff have master's degrees, many in literature, he said, which allows for excellent customer service. The bookstore now has a starting salary of $15 per hour for its employees, and is, to Mr. Madan's knowledge, the first bookstore in the U.S. to do so.

The foundation is having success in drawing big literary names to town and curating high-attendance events."There's no way a bookstore could run as high-caliber a program as we have," Mr. Madan said.

"Silicon Valley is a really important market for anyone who's writing something or saying something important," Ms. Forstner said.

Mr. Madan added that Kepler's events can attract a broad audience, from all across the Bay Area and beyond, and inclusive of business and tech folks who are interested in literature. Increased outreach and marketing efforts help fill seats too, noted Ms. Forstner.

"We can bring in a Nobel physicist and pack the room," Mr. Madan said. "Not everywhere can do that. We've really learned what our community wants."

People in this area are busy and are more likely to attend events when they know they won't be able to get the experience anywhere else, Ms. Forstner said. "We want to be producing events that people think are worth their time," she added.

Because of that, Mr. Madan said, the event team has pivoted from a more traditional literary event format – the author reading a few passages and answers some questions – to hosting conversations with authors.

Some authors say that during their book tours, they get the best audience questions at Kepler's, he said.

The fastest-growing part of Kepler's business, Mr. Madan said, is its online Giftlit program. The website, bequeathed to the bookstore, rounds out the reconstructed business model by offering books online via a subscription service, in which people can order a curated set of books to be delivered monthly in three-, six- or 12-month packages.

Go to keplers.com for more information about the bookstore, keplers.org for more about the literary foundation and giftlit.com for the GiftLit program.


Congrats to Clark Kepler on his retirement. He gave his whole life to the bookstore, which has brought so much enjoyment to the community. Thank you, Clark and family.

A Pragmatic Approach to A Trillion Trees
By Sherry Listgarten | 4 comments | 4,081 views

Singapore's oldest cafe was about to open in Palo Alto. Then, the coronavirus hit.
By Elena Kadvany | 2 comments | 3,541 views

Repairing a Disagreement with your Beloved & “Physical” vs. “Social” Distancing
By Chandrama Anderson | 2 comments | 2,746 views